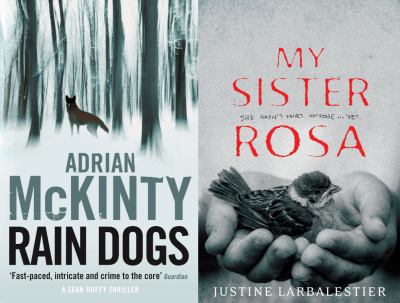 Australian author Justine Larbalestier and Melbourne-based Irish author Adrian McKinty have been shortlisted for the 2017 Edgar Allan Poe Awards (the Edgars), which honour ‘the best in mystery fiction and nonfiction’ published in the US in 2016.

Larbalestier’s My Sister Rosa (A&U) is one of five titles nominated in the young adult category, while McKinty’s Rain Dogs (Serpent’s Tail) is one of six books that made the best paperback original shortlist.

This is the first time Larbalestier has been nominated for an Edgar award. McKinty was shortlisted last year for Gun Street Girl (Serpent’s Tail).

Shortlists in 12 other categories have also been announced, including novel, first novel, fact crime, short story and juvenile. To see the full shortlists, click here.

The winners will be announced at the Mystery Writers of America’s 71st Gala Banquet, held on 27 April in New York City. For more information, visit the Edgars website here.