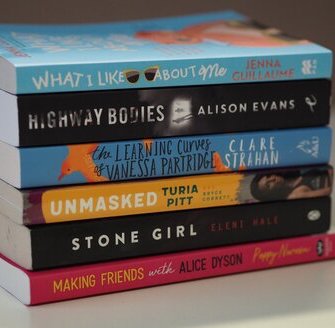 YA books shortlisted for Readings Prize

The shortlist has been announced for the Readings Young Adult Prize, presented by the Australian independent bookseller for debut or second YA books. The shortlisted titles are: Highway Bodies (Alison Evans, Echo), What I Like About Me (Jenna Guillaume, Pan), Stone Girl (Eleni Hale, Penguin), Making Friends with Alice Dyson (Poppy Nwosu, Wakefield), Unmasked (YA edition) (Turia Pitt, Random House) and The Learning Curves of Vanessa Partridge (Clare Strahan, Allen & Unwin).

At the End of Holyrood Lane by Dimity Powell and Nicky Johnston (EK Books), a picture book that explores domestic violence and its effect on young people, has won the Australian and New Zealand division of this year’s Crystal Kite Member Choice Awards, presented by the Society of Children’s Book Writers and Illustrators.

Popular children’s author Paul Jennings has received the Children’s Book Council of Australia Lifetime Achievement award. Jennings is the author of more than 100 books and has sold more than 8 million copies worldwide.