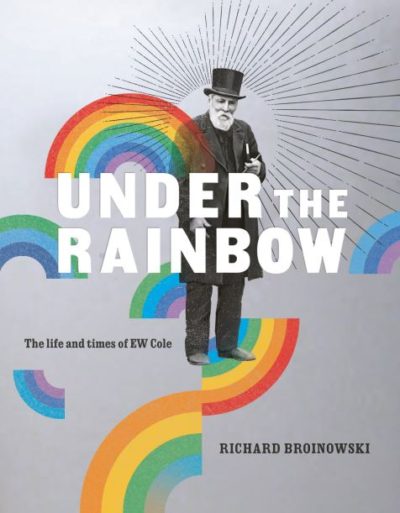 Under the Rainbow: The life and times of E W Cole (Richard Broinowski, MUP)

Edward William Cole (1832—1918), arguably Australia’s most famous bookseller, started his career by accident. Trying to hawk his self-penned pamphlets door-to-door in East Melbourne, a woman told him he should try selling books with catchy titles. She had a shelf full inside—would he like to buy them? At the time Cole was selling pies from a wheelbarrow at Melbourne’s Eastern Market. He added books along with the pies and the books took off. Cole moved his operation from wheelbarrow to market stall before opening his first Bourke Street Book Arcade in 1873, finally moving to bigger premises in 1883. Cole’s Book Arcade was a veritable wonderland of books, featuring, among other things, a fernery where customers could relax, an aviary and in later years, caged monkeys. Cole himself ran a unique business model, placing inspirational quotes around his store and encouraging people to linger and read as long as they liked, with no pressure to buy. Former diplomat and author Richard Broinowski has written an exhaustive account of Cole and his times, weaving in related contemporary issues of race, religion, economics, international diplomacy and war. Featuring stunning photographic illustrations, Under the Rainbow will appeal to students of Melbourne’s more magical past.

Chris Saliba is a co-owner of North Melbourne Books and a freelance reviewer.