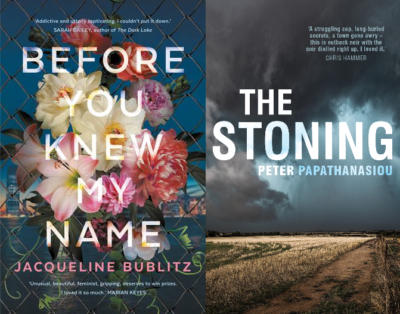 Jacqueline Bublitz has been longlisted for the Gold Dagger for best novel for her debut Before You Knew My Name (A&U), published by Little, Brown in the UK. Bublitz’s novel follows Ruby, who discovers the body of Alice in New York City’s Riverside Park. Unbeknownst to Ruby, Alice is watching on as she embarks on a journey to unravel the mystery of her death.

Peter Papathanasiou has been longlisted in two categories for his novel The Stoning (Transit Lounge), published in the UK by MacLehose Press: the Gold Dagger and the John Creasey (New Blood) Dagger for best debut. Papathanasiou’s novel tells the story of a crime that rocks a small Australian outback town, with suspicions falling both on the inmates of a nearby detention centre and the local Aboriginal community.

The CWA Dagger shortlists will be announced on 13 May at CrimeFest before the winner’s announcement at a ceremony in London on 29 June. To see the full longlists in each category, visit the CWA website.