When the Independent Publishing newsletter was launched in November 2017, we put together a reader survey to obtain a snapshot of our audience and to ask for feedback on the content that the independent publishing audience would want to know more about. The survey closed on 31 December 2017 and had 199 anonymous responses. 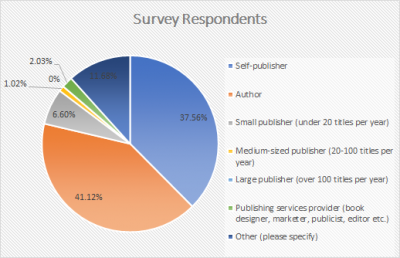 In response to the question, ‘What would you most like to read about in this newsletter?’, 44.4% of respondents selected ‘do-it-yourself (DIY) publishing tips’, 23.2% of respondents chose ‘Q&A with other self-published authors’ and 17.1% said they wanted ‘publishing industry news’. Information on events and festivals was also of interest to 10.1% of respondents, while special offers and ISBN information both drew 2.5% of the vote. 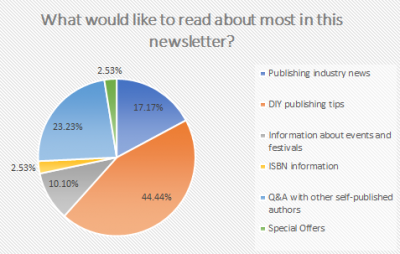 The survey also provided readers the opportunity to voice their comments or feedback. The overall feedback showed just how many authors/publishers/indies there are out there who are taking on self-publishing with an entrepreneurial spirit and business-minded professionalism.

New technology and services abound for those who need a helping hand, yet there is definitely a confidence gap in some areas. Many comments referenced the confusion or difficulty faced by self-publishers around distribution and getting books into bookstores. Requests were also made for more information on: print-on-demand, small cost-effective print runs, printers in general, marketing and promotion, finding readers and reputable editors, how to go about book launches, and copyright.

Independent Publishing recognises the need for more reliable, local sources of information, and will endeavor to close gaps in knowledge and address the issues facing independent publishers and self-publishers.

Eight points to consider before signing with a hybrid publisher

From the archive: the basic book promotion field kit