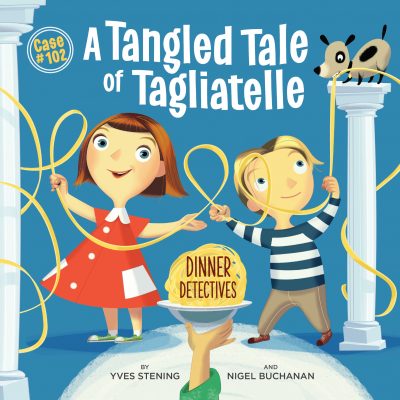 A Tangled Tale of Tagliatelle is the second instalment in Yves Stening and Nigel Buchanan’s self-published ‘Dinner Detectives’ series, which takes children on the hunt for the origins of specific cuisines. The first book, A Fearsome Beast and a Dumpling Feast, was all about dumplings, and the second focuses on Italian cuisine. Main characters Clementine and her brother Aksel are joined in their quest to discover the history of pasta by next-door neighbour Sophia, whose papa makes a delicious tagliatelle al ragu. The book sneakily introduces culinary facts and history, both well known and obscure, to young readers. Children will learn that Bolognese sauce comes from Bologna and Marco Polo popularised an array of interesting shaped pasta, such as farfalle (butterflies), orecchiette (little ears), ombelico (belly buttons) and vermicelli (little worms). Stening can’t resist the odd mischievous play on words (Pisa/pizza), and Buchanan’s cartoon pictures are bright and vibrant. Similar to the first book, which includes a dumpling recipe, Stening finishes with a tagliatelle al ragu recipe that lets little chefs try out their cooking skills. Suitable for readers in their early primary school years, the ‘Dinner Detective’ series will inspire children to appreciate a wide array of food from different cultures and learn about their origins.