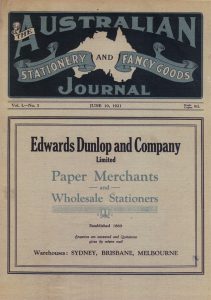 Books+Publishing‘s first magazine was founded in 1921 by Daniel Wrixon Thorpe as the Australian Stationery and Fancy Goods Journal, at a time when there were few Australian retailers solely focused on the sale of books. The magazine has been continuously published ever since, changing its name to Ideas in the 1937. (See the chronology here.)

The name changed to Australian Bookseller & Publisher in 1971 when the D W Thorpe company was taken over by Thorpe’s daughter, Joyce Nicholson. 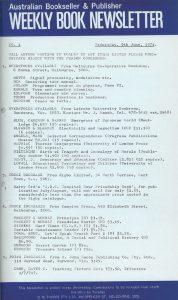 In 1971 an offshoot of the magazine, the Weekly Book Newsletter, began publishing weekly book industry news and became colloquially known as the Blue News, because of the blue paper it was printed on.

In 1992 the D W Thorpe company was sold to Reed Reference Publishing, then sold to R R Bowker in 2001, and the company became Thorpe-Bowker in 2003.  In 2001, the Cambridge Information Group (later becoming ProQuest LLC) had acquired R R Bowker, which was repositioned as an affiliate of ProQuest.

The Think Australian magazine was established in 2002 to provide information about rights sales of Australian books to at audience at the Frankfurt Book Fair.

A newsletter called Media Extra, listing the mentions of books in Australian media for booksellers, began in 2004 and finished publication in 2012. 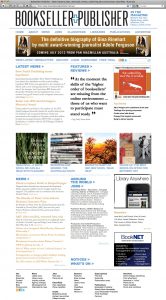 The word ‘Australian’ was dropped from the magazine’s title at the start of 2006, to become Bookseller+Publisher. In 2006 the Weekly Book Newsletter became an online publication. 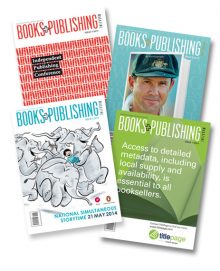 In 2013, the Books+Publishing Daily newsletter, featuring the latest local and international news stories about the book industry, began to be sent out on a daily basis.

The Book Buzz newsletter, a newsletter allowing publishers to showcase their new and upcoming books, was established in 2016.

In celebration of its 100th birthday in 2021, and to prepare to continue serving the publishing industry for the next 100 years, Books+Publishing transitioned to a digital-only publication.

While continuing to deliver daily news to its local and international audience, Books+Publishing has expanded its social media presence with increased author engagement through the Books are Essential campaign, and continues to reach a global audience through the Think Australian rights newsletter and strategic partnerships with international colleagues Publishers Weekly and Book Brunch.

Books+Publishing will continue honouring the vision of  founders Daniel Wrixon Thorpe and Joyce Thorpe Nicholson, a vision that has stood the test of time and is, in fact, more relevant in today’s world than it was in 1921.