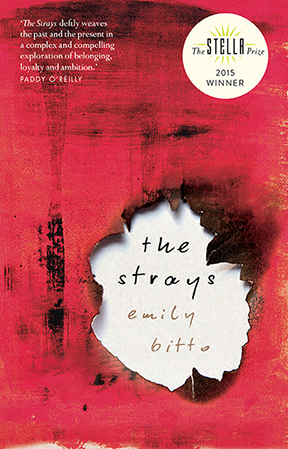 The Strays by Emily Bitto (Affirm Press) has won the 2015 Stella Prize for women’s writing.

Bitto was presented with the $50,000 prize at an awards ceremony in Melbourne on 21 April. She was chosen from a shortlist of six that also included: Foreign Soil (Maxine Beneba Clarke, Hachette), The Invisible History of the Human Race (Christine Kenneally, Black Inc.), The Eye of the Sheep (Sofie Laguna, A&U), The Golden Age (Joan London, Random House) and Heat and Light (Ellen van Neerven, UQP). Each of the shortlistees received $2000.

This is the first time the Stella Prize has been awarded to a debut work. The winner was chosen from more than 150 entries by critic and writer Kerryn Goldsworthy, journalist and broadcaster Caroline Baum, writer and lecturer Tony Birch, singer-songwriter Sarah Blasko and author Melissa Lucashenko.

Bitto said it was a ‘life-changing honour to be selected as the third recipient of the Stella Prize’. ‘Even since being included on the Stella shortlist, I have noticed a clear difference in the kind of attention that my work has received. The Stella Prize is an award I feel very passionate about, and I am particularly honoured to have won a prize that has grown from a motive so dear to my own heart: the desire to redress gender inequality in the literary world.’

Bitto said she was donating a portion of her prize money to the Wilderness Society in the tradition of previous winners. Inaugural winner Carrie Tiffany donated a percentage of her winnings to her fellow shortlisted authors, while Wright donated some of her winnings to the Indigenous Literacy Foundation and her local high school.

Bitto has a Masters in literary studies and a PhD in creative writing from the University of Melbourne, and runs the Carlton wine bar Heartattack and Vine. The Strays was shortlisted for the 2013 Victorian Premier’s Literary Award for an Unpublished Manuscript.

Chair of judges Kerryn Goldsworthy described The Strays as a novel ‘about families, art, isolation, class, childhood, friendship, and the power of the past’. ‘In its subject matter, its characters, and its sombre mood, this novel is reminiscent of Ian McEwan’s Atonement, Sybille Bedford’s Jigsaw, or A.S. Byatt’s The Children’s Book, and in this company it can hold its head high. The Strays is like a gemstone: polished and multifaceted, reflecting illuminations back to the reader and holding rich colour in its depths.’

The Stella Prize was established to celebrate Australian women’s contribution to literature. For more information, visit the website here.