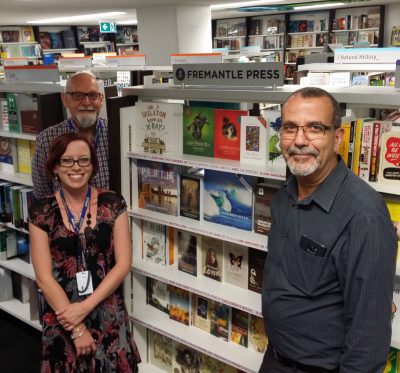 Fremantle Press has kicked off its 40th anniversary celebrations by fitting out a number of local bookstores with branded shelving.

Marketing and communications manager Claire Miller told Books+Publishing that Boffins in Perth was the first store to be fitted out in January, with over 10 stores signing up since then. ‘Now that we have samples to show, more bookstores are coming on board each week,’ says Miller.

The branded shelves are created by fitting decals, shelf talkers and posters to booksellers’ existing shelves.

CEO Jane Fraser said the publisher ‘always had grand plans to create specially branded Fremantle Press shelves, and they did exist for a long time in some stores, like the old New Edition in Fremantle’.

‘Booksellers throughout WA have always been incredibly supportive of Fremantle Press, through good times and bad, and so the 40th anniversary gave us the perfect opportunity to get them on board again in a positive and very celebratory way,’ said Fraser.

The publisher is also celebrating its anniversary with a new hardback classics range, called ‘Fremantle Press Treasures’. The first two titles in the series, The Newspaper of Claremont Street by Elizabeth Jolley and Stories from Suburban Road by T A G Hungerford, will be published in March.