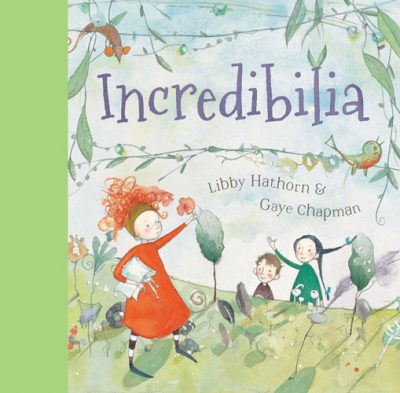 Little Georgie is the youngest and she’s frequently forgotten by the other children Max and Harriet who are otherwise occupied with their own play. Little Georgie is not deterred though, and she continues to invite the other two children to join her imaginative games. When Little Georgie decides to play her own special invention, ‘Incredibilia’, the other two become curious, and the three of them start to play the game together. Written by one of Australia’s most respected authors Libby Hathorn, this is a charming story of three children, their imaginations and the problem of being the youngest. The emphasis on playing outside and imagination is a pleasure to see. Gaye Chapman’s beautiful watercolour and mixed-media illustrations feel like an extension of Little Georgie’s imagination, depicting a magical outdoor landscape where the children play. Incredibilia is recommended for sharing with young children, especially those who are the youngest in the family, or for early readers, who will enjoy being involved in the games and finding the objects and secret messages Little Georgie imagines.

Margaret Hamilton is a former children’s book publisher. She is now proprietor of Pinerolo, the Children’s Book Cottage in Blackheath, NSW