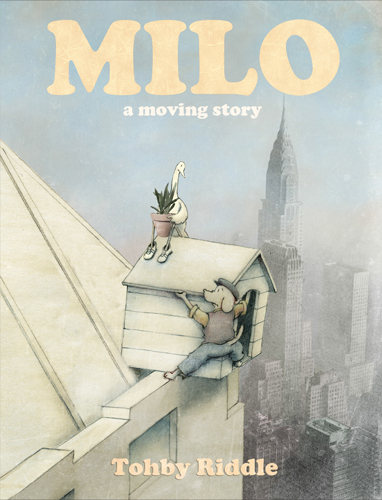 The latest picture book from Tohby Riddle is all about Milo, a dog who ‘lived in a solid kennel in an okay part of town and had few complaints’. Milo hangs out with his friends playing fetch and chasey and when he’s not with his mates, he works as a messenger. One day Milo has a nightmare about being in a boat tossed on an angry sea and the next day an argument with a friend unsettles his world even more. After a ferocious storm, he wakes up and discovers his kennel has moved and is now resting precariously on the edge of a building. Metaphorical images such as bull ants in the head, moths and the storm all show his inner turmoil. Fortunately, there is a chance meeting with Carlos, a migratory bird, and after a series of adventures, Milo is safely returned home. Riddle’s palette is sepia-toned, which gives it a feeling of yesteryear, with the occasional pop or spread of colour. The illustrations are more sophisticated than childish: Milo looks as though he’s from the 1940s, dapperly dressed in a vest, slacks, rolled-up sleeves and a cap. This book is slightly surreal (the bird, for instance, wears sneakers) but its heart is about the importance of nurturing friendships, forgiveness and tolerance. Age-wise, it is best for early primary school readers.