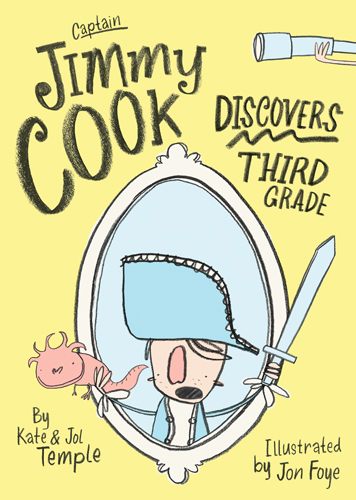 Jimmy Cook is absolutely certain he is related to Captain James Cook. During History Week at school, Jimmy begins writing a Captain’s Log (not a diary, because those are for girls), just like his famous ancestor. When Jimmy discovers that Captain Cook didn’t have any ancestors and was killed in Hawaii over 200 years ago, he determines to get there as soon as possible to quell the marauding natives. Yes, this kid is a bit thick, delusional, sexist, and, at age seven, far too young to be in Grade Three. His obtuse nature does, however, set him up for some funny escapades. Jimmy discovers a ‘Wheatblocks’ competition to win a trip to Hawaii and sets up a society to stockpile the coupons from the boxes to win. However, when he excludes his nemesis Alice Toodles from his society, she begins a competing club that is far more successful. That is, until an epidemic of constipation takes over the school. Will Jimmy get enough coupons to win the competition before constipation stops him, or will Alice Toodles publicly embarrass him? This is the first junior fiction title from picture book authors Kate and Jol Temple, alongside illustrator Jon Foye. Their books Parrot Carrot, I Got This Hat and Mike, I Don’t Like combined word play and clever humour. Sadly, Jimmy Cook doesn’t feel quite as fresh or as fun as their previous offerings. It will appeal to boys aged seven to nine who like humorous school stories.

Angela Crocombe is the children’s buyer at Readings Carlton