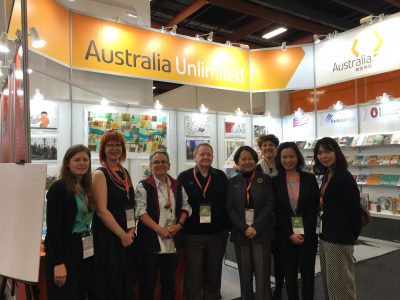 The vibrant and energetic Taipei International Book Exhibition was held in early February and, for the 10th year, we had a delegation of Australian rights sellers in attendance. Katy McEwen (Pantera Press), Nerrilee Weir (Penguin Random House) and William Webster (the Australian Self Publishing Group) attended the fair, along with Ann James and Justine Alltimes from Books Illustrated, who presented the Hello! from Australia exhibition.

The Taiwanese publishing market continues to face a downturn with noted declines in book sales over the past few years, particularly in fiction. Book space in the renowned Eslite Bookstore is shrinking, with the space being taken up by nonbook retailers. Tables that in 2015 were full of new literary fiction from all markets are now full of colouring-in books and upmarket lifestyle and cooking titles. Nonfiction still has the most space, and the influence of an ever-increasing number of bestselling nonfiction titles from the US, Japan and Korea is very clear.

So are there still opportunities for Australian titles in this market? Definitely. The strongest opportunities are for nonfiction, lifestyle titles and children’s picture books, but it’s interesting to note that we’ve seen the publication of Australian titles such as The Night Guest by Fiona McFarlane (Penguin), The Rosie Project by Graeme Simsion (Text) and Burial Rites by Hannah Kent (Picador) over the past three years, and 2016 will see the publication of Lost and Found by Brooke Davis (Hachette) and The Narrow Road to the Deep North by Richard Flanagan (Vintage).

Nonfiction categories are moving beyond business and health titles into more general areas of current affairs, local and world history, and global issues. We were also pleased to see the translated editions of titles by Curtis Stone, Katie Quinn Davies and Donna Hay still on the Eslite shelves.

Penguin Random House Australia received strong interest in lifestyle and cooking titles, along with children’s picture books. Katy McEwen of Pantera Press reported ‘interest in some of our fiction titles, particularly thrillers, as well as our nonfiction series “Why vs Why”, with the titles tackling gay marriage and nuclear power both topical’. William Webster from the Australian Self Publishing Group also found that nonfiction attracted the most attention.

The Hello! from Australia exhibition was very successful with James and Alltimes holding meetings with Taiwanese publishers and pitching picture books featured in the exhibition’s rights catalogue. James gave two presentations during the fair on the contemporary scene in Australian children’s picture book publishing. These presentations, along with James’ captivating live demonstrations of illustrating, drew a substantial crowd of Taiwanese publishers to the Australian stand. Once there, the publishers would watch James at work before browsing among the exhibition itself, the other publishers’ shelves and displays, and making queries about specific titles.

The Taipei International Book Exhibition not only gives rights sellers the chance to meet one-on-one with Taiwanese publishers, but also to attend workshops and seminars, including the Frankfurt Academy Training Program (run in conjunction with the Frankfurt Book Fair). This year’s seminar offered a close look at the publishing world in India (presented by Ananth Padmanabhan of HarperCollins India) and a presentation on rights markets to watch (including Turkey and Mexico). Conversation and discussion was also stimulated by Philip Chen of Bardon-Chinese Media Agency, who highlighted the need to focus on building domestic readership for local authors, as well as building their international profiles. Nerrilee Weir was included on a panel as part of the Taipei Fellowship and spoke on the challenges of selling rights.

The fair also provides the opportunity to meet with publishers from different countries, either through formal meetings or through networking functions and receptions. Not only did we have the chance to talk to the New Zealand delegates, but also to meet and pitch to publishers from France and Hungary.

Our attendance at Taipei International Book Exhibition was made possible by the ongoing support of Austrade Taipei. Assistance was also provided by Books Illustrated in association with the Australian Publishers Association, with the Copyright Agency funding the Hello! from Australia exhibition.

Jacqueline Bublitz on ‘Before You Knew My Name’  Features Interview