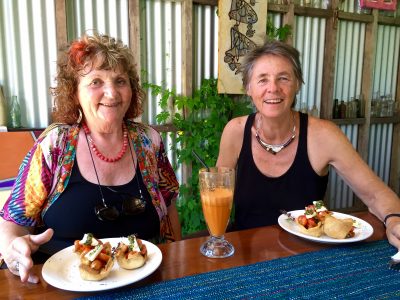 Founded by Susan Hawthorne and Renate Klein in 1991, Spinifex has published around 250 poetry, fiction and ‘controversial’ nonfiction titles over the past 25 years.

Hawthorne told Books+Publishing the publisher counts among its biggest achievements its balance of local and international titles, its rights sales and work with international publishers, and ‘keeping ahead of the cultural curve both in terms of the content of our books and our technological initiatives with websites, interactive fiction and ebooks’.

‘As a delegate on the recent Australia Council Publishers Delegation to India, we realised that we had worked on more than twenty projects with Indian publishers and we had three Spinifex authors on the program at this year’s Jaipur Literary Festival,’ said Hawthorne of the publishers’ international work.

Locally, Spinifex has contributed to the Australian publishing community by organising events such as the International Feminist Book Fair in Melbourne in 1994 and training other publishers in digital publishing—‘which many Australian publishers did in 2010 while we had entered the field in 2006,’ said Hawthorne.

Other highlights include being ‘probably’ the biggest publisher of lesbian titles in Australia, contributing to Australian culture ‘politically, socially and artistically’, and contributing to the political discussions around copyright and parallel importation.

Hawthorne said Spinifex would like to expand its rights sales in the future, ‘especially into film and other art forms’, and to increase its profile in Australia ‘where we seem to have more trouble getting our books reviewed’. ‘We would of course like to increase sales but not at the expense of quality and integrity,’ said Hawthorne.

Spinifex’s plans for its anniversary year include a conference in April in conjunction with RMIT called ‘The World’s Oldest Oppression’, which will include the launch Prostitution Narratives: Stories of Survival in the Sex Trade (ed by Caroline Norma & Melinda Tankard Reist); a event in September called ‘That’s Feminism’; and several other yet-to-be-announced plans.