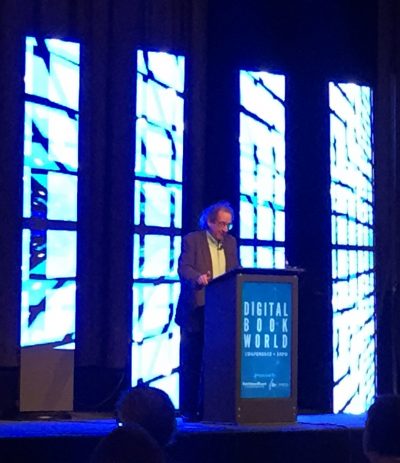 This year’s Digital Book World conference was held in New York from 7-9 March. Books+Publishing’s Andrew Wrathall reports from the event:

Digital Book World (DBW) organiser and The Idea Logical Company CEO Mike Shatzkin set the tone for the conference in an opening speech. Shatzkin said: ‘As shelf space shrinks, publishers rely more on Amazon, Apple, Google and Facebook’—the big four online platforms that he and other speakers described as the ‘four horsemen’.

Shatzkin said the greatest challenge for traditional publishers is to create platforms to communicate with readers, and that their biggest failure is a lack of support for authors in creating a digital footprint. He observed that half of all ebooks sold today come from independent self-published authors. Shatzkin also noted that the conference was no longer about digital books, but rather about books in a digital world.

University of Southern California professor Jonathan Taplin gave a speech on the ‘four horsemen’ and said: ‘Although I’d love to think content is king, I’m concerned that platform is king.’ Taplin said that over the past decade, US$50bn (A$66bn) per year has moved from content and copyright owners to platform owners Google, Amazon and Facebook. He argued that Amazon is not operating in a monopoly but a ‘monopsony’ as a dominant buyer with the power to push prices down.

Jessica Sänger, legal counsel at the German Booksellers and Publishers Association Börsenverein, spoke about two German antitrust cases. The first case was a complaint over Amazon asking a publisher to pay a higher discount on ebooks; after the publisher refused, Amazon delayed deliveries of the publisher’s print books. The second case involved Audible ending contracts with small audiobook companies and forcing contracts with a flat-rate model and streaming rights. Sänger said: ‘We’re not anti-Amazon per se. Amazon has brought tremendous competition that has professionalised the sector.’

New York University professor Scott Galloway argued that the ‘four horsemen’ are taking over the world and disrupting the publishing ecosystem. Galloway said 42.7% of all online sales in the US from November to December 2015 were made on Amazon. He said the future of advertising belongs to two companies, Google and Facebook, which are slowly consuming the online advertising industry and currently have 60% market share for mobile advertising. Galloway said Apple and Amazon continue to dominate retail and that ‘Amazon is responsible for fifty-one percent of all growth online’. He said Amazon owner Jeff Bezos ‘denied he’ll open hundreds of stores, which is accurate, he’ll open thousands’, because ‘ecommerce isn’t a business, it’s a channel’.

A presentation was given by the anonymous ‘Data Guy’, who founded Author Earnings with author Hugh Howey. The presentation showed how data from the daily rankings of hundreds of books on Amazon could be used to create an algorithm to increase a book’s sales. The presenter estimated that Amazon’s daily ebook sales are around one million units, representing US$5.75m (A$7.62m).

Shatzkin spoke with Barnes & Noble (B&N) chief digital officer Fred Argir about the bookseller’s digital business. Argir said B&N will transition away from Nook in the UK and focus on areas of the business that are more profitable. He said ‘mobile is more than fifty percent of traffic for B&N’ and ‘we must win the mobile experience … we think that is a tool customers can use inside our store’.

Shatzkin also spoke with Ingram Content Group CEO John Ingram about transformation within his business. He said Ingram’s acquisition of Perseus changes its ‘centre of gravity’ away from the traditional wholesale business. He spoke about Ingram’s 1440 Accelerator project, which invests in start-ups working with books in digital spaces.

A panel on women in publishing highlighted the lack of women in senior roles. In the US 78% of the publishing workforce are women, but 40% of senior roles are held by men. Statistics on race show that 80% of the publishing workforce are white, 7% Asian, 5.5% latino and 3.5% black. Abbott Communications principal Charlotte Abbott said: ‘Gender and racial inequity in tech is so ubiquitous that many women and minorities simply leave the industry.’ Sourcebooks CEO Dominique Raccah noted that ‘the ebook revolution was run by women’ and that 80% of customers are women. Penguin Random House senior director apps channel Katherine McCahill observed that ‘the more diversity in the workplace, the more you don’t end up with groupthink’.

Andrew Wrathall’s attendance at DBW was supported by the Copyright Council Cultural Fund.