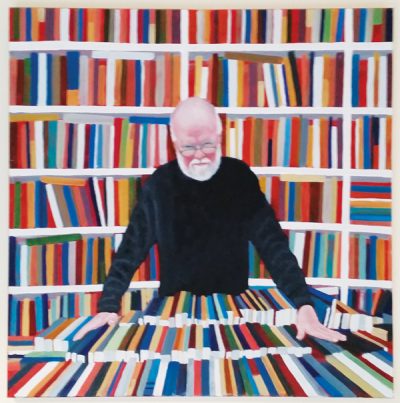 Pearce and co: A history of the Hobart Bookshop

Christopher Pearce followed his father Cedric into bookselling, working first at Fullers and then the Papua New Guinea Bookshop before opening the Hobart Bookshop with his partner Janet, writes bookseller Anica Boulanger-Mashberg.

I started at the Hobart Bookshop almost 10 years ago—a trifling anniversary considering this year sees 70 years since the shop’s patriarch, Cedric Pearce, began in bookselling. Cedric passed away in 1982 but his son Christopher Pearce, already more than 40 years a bookseller, proudly follows in his father’s footsteps.

Cedric was a man of many talents: a ‘most unwilling bank clerk’ (according to an old Mercury newspaper), a union leader, a sailor, a publisher and a jazz drummer (in the Pearce-Pickering band). Bookseller by day, musician by night, Cedric made an indelible mark on both the Australian publishing and jazz scenes, and his legacy is celebrated in the Hobart Bookshop 364 days a year (we do close on Christmas), whether in the jazz we always play; in our attitude to bookselling; or in social drinks an hour before closing time—a tradition to which Cedric held religiously.

The bookselling lineage of ‘King Cedric’ (a teasing nickname following a television interview during which he claimed Tasmania needed to secede, complete with our own Royal Family) was not through his own father but through eminent Tasmanian bookseller William Fuller, who had no sons and invited his employee and friend Cedric to continue the family business.

In 1960 after Fuller died, Cedric, his brother Ian and their colleague Lindsay Hay incurred great personal debt to buy the remaining shares in Fullers, already a literary and artistic hub where writers and thinkers gathered in the basement (over the 5pm drinks); young hopefuls sought literary feedback (Christopher Koch was one—Cedric employed him in the shop); there was even a library and art gallery. Cedric was later elected federal president of the Australian Booksellers Association.

Christopher worked at Fullers with his father and uncle until they sold it in 1981. He was then offered a job managing the Papua New Guinea Bookshop, so he and his partner Janet Grecian moved their family to Port Moresby. In 1990, not long after their return to Tasmania, they opened the Hobart Bookshop. Ten years later the opportunity to move to our current location in Salamanca Square, on Hobart’s waterfront, gave the shop a little more room, though it’s still very much the kind of overcrowded haven where readers indulge in the treasure-hunt style of book-buying.

Our range echoes Cedric’s passions, incorporating Christopher’s and Janet’s: new and secondhand general stock; a massive collection of both new and old Tasmaniana; an extensive children’s section; and, of course, lots of music books (I didn’t even know there were that many about Bob Dylan). Christopher’s favourites range from John Christopher’s The Death of Grass to Tintin.

Like Cedric’s shop, Christopher and Janet’s is fundamentally supportive of writers (particularly local writers), sponsoring organisations and awards including the Gwen Harwood Poetry Prize. We also host launches almost every week, from large events to tiny friend-and-family gatherings where poets nervously present their first shy chapbook to the world. Christopher attends every one of these launches without fail, treating self-published authors with the same irreverent kindness as Booker winners.

As the shop’s dear friend Richard Flanagan has said, ‘Chris and Janet are book people before they are business people’. Christopher knows more about literature and the publishing industry than most of us can ever hope to know about anything at all, and holds the entire shop’s stock catalogue in his head more reliably than our computer database, while Janet reigns supreme in the children’s section and can find a book to delight even the most reluctant teenage reader. Christopher remembers every book ever published in or about Tasmania. They employ passionate readers, and never call us ‘staff’.

The Golden Age of Booksellers (Abbey Press, 1981) charmingly opines: ‘One always thinks of Cedric as a man one would like to see more often.’ I think Christopher’s like his father, and our many regulars—some of whom have been with us since the start—seem to agree. Not a day passes in the shop without someone popping in to bring a book they think Christopher might like to sell, critique, launch, or just read. They’re invariably disappointed if it happens to be one of his few days off, the plaintive ‘Chris not in today?’ usually accompanied by some sort of undeserved but readily reciprocated taunt about slackness.

Not long before Christopher and Janet started The Hobart Bookshop, Cedric wrote of his depression about the state of the book trade, yet cautious optimism that small bookshops would again begin to thrive as larger sellers failed to provide what customers really wanted. Several years ago, similarly, our industry spun into terrified depression about what ereaders and internet sales might do to us. Certainly there have been casualties. But for those of us lucky enough to survive it seems perhaps Cedric’s prediction is finally coming true: customers now, more than before, value and need the reading communities that independent booksellers build and nurture.

Recent bestsellers at The Hobart Bookshop