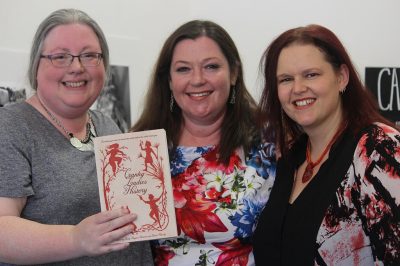 ACT-based speculative fiction publisher FableCroft was launched in 2010 by editor Tehani Wessely. She spoke to Books+Publishing for our ‘small publisher spotlight’ series:

FableCroft Publishing is a boutique press dedicated to the future of speculative fiction in Australia, with a charter to promote both emerging and established authors and artists in the speculative fiction field, as well as the broad genre as a whole.

I had been working with other indie press in Australia, including with Andromeda Spaceways Inflight Magazine and Twelfth Planet Press, but there were projects I wanted to do that were outside the province of those publishers. I absolutely love creating something new with an author or authors, and felt it was time to go out on my own.

Our first project was the anthology Worlds Next Door, a collection of Australian speculative fiction stories aimed at nine- to 13-year-olds, which launched in mid-2010.

I’m very fortunate to work with a multitude of authors, from all over the world (although primarily Australia), and FableCroft pays all our authors, so the number is in the hundreds, I suppose! I also have wonderful proofreaders, designers and artists who do amazing work to make the books look so good, and a very excellent ‘intern’, who is a massive support to the press.

The fact I have been known to conceive of and bring a project to publication within six weeks! Most books take longer than that, but it has happened…

I’d have to say the Cranky Ladies of History anthology has made the biggest splash, partly because of the more mainstream notice the book got (particularly during the crowdfunding campaign in 2014, which coincided with Women’s History Month and International Women’s Day), but also because readers were very taken with the title and idea behind the book.

I don’t tend to covet the work of other fabulous Australian small press, because the more of us there are producing great work, the better for everyone (especially readers and creators!), but if I had to choose one, the 2014 Kaleidoscope anthology from Twelfth Planet Press was brilliant.

The very next book we will release is a nonfiction collection by Kate Forsyth titled The Rebirth of Rapunzel: A Mythic Biography of the Maiden in the Tower, which explores the Rapunzel myth. We also have a new omnibus edition of Tansy Rayner Roberts’ first two comic fantasy ‘Mocklore’ books out this month, and a new all-Australian anthology containing thoughtful and confronting speculative fiction called In Your Face, coming soon as well.