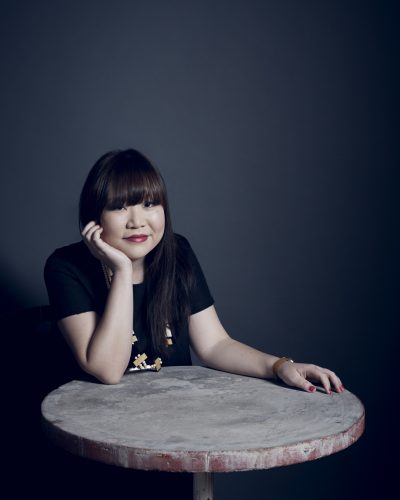 How does the brevity of the short story form shape your narratives in Portable Curiosities? Some of the short stories in Portable Curiosities are plot-heavy, so it took several revisions to pull off the plot points effectively and concisely. In the early stages of writing ‘Cream Reaper’—a story about extreme ice-cream—I printed the draft, spread the pages out on the floor, and scribbled all over them in texta to figure out how to make the plot work.

The brevity of the form, however, doesn’t seem to affect the real-time length of my narratives. Sometimes my stories will take place over the course of a few days or months, or the story might span the lifetime of a character, as in the case of ‘Two’—about a man who decides that if life is fleeting, he will beat it.

The first story ‘Sight’ taps into a widely held Malaysian belief that black magic exists. To what extent does your Malaysian-Chinese background inform your writing?

‘Sight’ is an unusual story for me because it’s one of the few pieces of fiction I’ve written that focuses on Chinese-Malaysian characters. I have a large extended family in Malaysia, and a good section of it is hip to black magic. Also, a number of my relatives have third eyes and can see ghosts—ghosts that walk up walls, ghosts that have no feet, ghosts that are only feet. ‘Sight’ is a mash-up of different stories I’ve heard from them, with some imagination thrown in.

When I was young, it didn’t occur to me that my writing would have much to do with my ethnicity. I finished high school writing kitchen-sink dramas about middle-aged suburban white men having mid-life crises. I’d always thought that I was incidentally Asian—that my race was just one of many things that I was. As a young adult, however, I kept meeting people who reminded me constantly that I was Asian. My ethnicity was the first thing they saw when they met me, and it imported into our interactions so many stereotypical expectations about who I was as a person. My adult life has been spent having to demonstrate to people what I am not. Recently, I’ve had to tell well-meaning people that I’m not Dami Im—that having a blunt fringe and black hair doesn’t automatically get me a standing ovation for ‘Purple Rain’.

I’m slowly processing how alienated I feel because of the way I look, and it’s coming out in my writing. In Portable Curiosities, I use and subvert stereotypes of Asians, and sometimes don’t even mention a character is Asian until partway through the story. I’m experimenting with ways to deal with Asian-ness in fiction—cracking it open and putting it back together to see what works. One of my stories, ‘The Three-Dimensional Yellow Man’, is about a one-dimensional yellow man who tries out life in three dimensions. It articulates how I currently feel about being Asian in Australia.

What drew you to satirical writing and why do you think it’s such an effective tool when it comes to illuminating the moral injustices of contemporary society?

I write what amuses me, and—unfortunately for my karmic record—what amuses me is fiction that slays. Strong satire cuts through the noise because it pinpoints what is so absurd about contemporary society. Wit and desolation are a lethal combination.

For a long time, I didn’t know I would become a writer. Literary ambition arrived late, only taking hold by my final year of a double degree in politics and law. Those degrees focussed on the structures and ideologies underlying how our lives play out. As part of my politics degree, for instance, we studied Animal Farm as an analysis of power. That level of attention to power dynamics has persisted in my fiction. I still think about particular literary works I studied in high school—A Modest Proposal, Catch-22, Brave New World—and marvel at the way in which they have continued to help me comprehend this complex world.

Many people think political fiction is a blunt, old-fashioned, didactic instrument, especially when there is so much good nonfiction around that addresses the same issues. A common assumption these days is that ‘good’ literary fiction is apolitical—that the finest fiction should primarily be concerned with emotional turning points, and with finding subtle but moving ways of describing the morning light hitting the water. I disagree. I think all literature is political, and that there is still space on the more overt end of the spectrum for short stories that function like political essays.

Who are your favourite short story writers who approach the form in new and inventive ways?

I always return to Tom Cho’s short story collection Look Who’s Morphing (Giramondo), a groundbreaking book in my reading life. It lit a path for me that showed I could be Asian and radically different in my fiction: I didn’t have to replicate The Joy Luck Club to get published.

I also frequently return to Haruki Murakami’s The Elephant Vanishes (Vintage). I’m a diehard Murakami fan, and flew to the Auckland Writers’ Festival last year to see him speak. I made sure I was at the head of the line for the session, and hurried to the microphone to be the first to ask him a question. I loved that trip to Auckland, and one of the stories in Portable Curiosities, ‘Satirist Rising’, was partly inspired by my time there.

Ryu Murakami’s Coin Locker Babies. The version I have is the 2013 edition by Pushkin Press, and I’m in love with the black-and-white cover design by David Pearson.

I like reading about alienation and outsiders, and the use of stylised, grotesque violence in Coin Locker Babies fascinates me. I have a hard time watching extreme violence on the screen but in books it doesn’t bother me. I have no trouble slaughtering my own characters either.