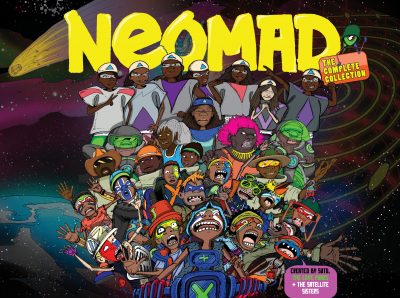 The winners of the 2016 Ledger Awards for excellence in Australian comics and graphic novels have been announced.

The winner of the 2016 Gold Ledger is Neomad: The Complete Collection (Sutu, The Love Punks & Satellite Sisters, Gestalt), a ‘neon-infused, sci-fi punk adventure series set in Australia’s Pilbara region in the year 2076’. The comic is a collaboration between graphic artist Sutu, who had eight titles shortlisted for the 2016 Ledgers, and more than 40 young people in the Ieramugadu community in Roebourne, Western Australia. It also exists as a multimedia app.

Bernard Caleo was awarded the 2016 Platinum Ledger for contribution to Australian comic arts and community, and Peter Chapman and Syd Nicholls were the inaugural recipients of the Ledger of Honour Hall of Fame award.