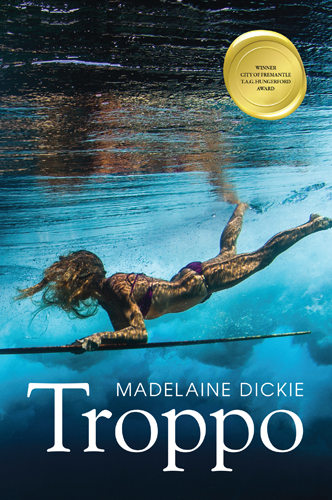 In Madelaine Dickie’s debut novel Troppo, which won the 2014 TAG Hungerford Award for an unpublished manuscript by a WA writer, we meet Penny, a young, directionless woman who finds living in Perth ‘boring’, just as she’s moved to a remote Indonesian village for a job at a surf resort. She’s warned against taking the position from the locals and other visitors: the owner, Shane, is violent, a drunk, and hostile towards the traditions of the Islamic community he now lives within. Penny takes the job anyway, setting off a chain of events that comes to involve the whole community. Troppo attempts to explore complicated themes—the disparities and violence of globalisation, religion and the flattening of traditions—but is undermined by clumsy execution, including a tendency towards expository dialogue and convenient plot points. More concerning is the novel’s set-up of the innocent Westerner amid the chaos of the unpredictable, violent Other; particularly the portrayal of an unsettling Imam with ‘the distinctive hooked nose of an Arab’ and ‘something uncomfortably shrewd in his long, distinct face’. Underneath is a fast-paced story that thrills at times, but many readers will be disappointed by the irresponsible narrative and jarring stereotypes.

Brad Jefferies is the news editor at Books+Publishing

How to Win an Election (Chris Wallace, NewSouth)  Nonfiction