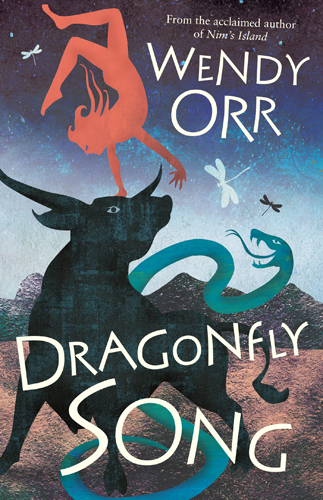 Born into privilege that is swiftly taken from her, Aissa learns early how painful life can be. In servitude at the age of four, never speaking and frequently mistreated, she accepts this is her lot in life, yet somehow still finds ways to learn, grow and explore. Aissa’s position in her society changes several times until, at 12, she is taken to become a bull dancer, a sacrifice in all but name. But the path has never been straight for Aissa, and her world continues to change and expand, right into the final pages. A beautifully written historical fantasy set in an ancient era, Dragonfly Song is a somewhat dark exploration of a child’s life in a harsh time. While in many ways this is a mature story, Wendy Orr deftly controls the content and narrative voice to engage the younger reader. Reminiscent in style of Glenda Millard’s ‘Kingdom of Silk’ books, albeit in a form that is perhaps a little overlong for the audience, Dragonfly Song straddles the gap between children’s and young-adult fiction and will reward the extending reader with its lyrical elements—an intriguing combination of prose and free verse—alongside strong characterisation and a skilfully unfolded story.

Tehani Wessely is a teacher-librarian, publisher and literary awards judge