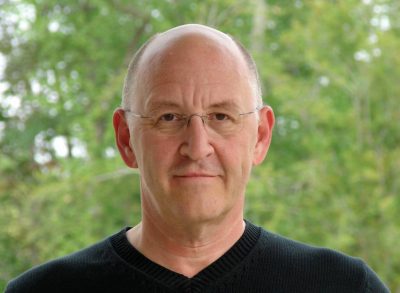 Michael Grant’s latest book is Front Lines (HGE). He is travelling to the Sydney Writers’ Festival and Brisbane in May

In this alternate history of WWII, women are subject to the draft and fight on the Front Lines. There’s a whole bunch about racist and sexist attitudes in the 40s, and then a whole bunch about killing Nazis. Surprisingly Michael Grant did not screw up the history, the characters are great and as for the frequently gruesome horrors of war, well, it’s a Michael Grant book, so strap yourselves in.

I am re-reading ‘Everworld’ [co-written by Grant and his wife Katherine Applegate] because the rights just reverted. So far what I’ve discovered is that I use a lot of really short sentences. Kind of my thing, I guess. Some sentences. Don’t even have a. Verb.

Lately I’ve really been pushing The Death and Life of Zebulon Finch by Daniel Kraus (S&S US). Kraus is me plus 10% more weird darkness. It’s an amazing book, so intricate, so beautifully odd and unique.

Probably the Bible. I’d been raised on it, and then I actually read it and just had to laugh. It was obvious nonsense. The plot is a mess, the pacing is unbelievably tedious, the whole premise is bizarre and the characters are either stiffs or escaped loons or wildly inconsistent.

I suppose I’d be someone in some literary novel dealing with ennui and anomie and existential angst and all that.

Peter Jackson’s incredible adaptation of The Lord of the Rings. And let’s all just pretend he stopped there and did not go on to trash The Hobbit.

A selection will be uploaded into your brain at birth. You’ll be able to open and read them with a thought, and download as many as you like merely by having the thought. Then of course the computer chip in our brains will go all Genghis on us and turn us all into mindless slaves, but hey, that’s inevitable, right? I for one salute our new Brain Chip overlords.