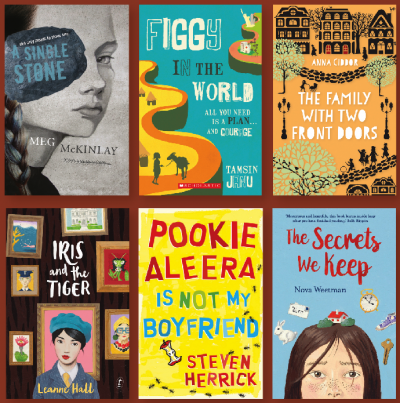 Unstuck in the middle: Middle-grade fiction in Australia

When people talk about younger readers, the language often invokes building and architecture—gateway literature, foundation years—and for good reason. Helping children to grow their confidence and fall in love with reading does feel like building them up book-by-book.

In the early stages of a reader’s life it’s easy to find material: board and bath books for the birth to two-year-old set; concept books introducing children to the alphabet and counting for readers aged two to four; and ‘early readers’ (sometimes called ‘junior fiction’) for four to eight.

The next leap is ‘middle-grade’ (MG) for eight- to 12-year-olds, followed by the jump to young adult for 13- to 18-year-olds. Middle-grade fiction is meant to bridge children’s reading from the more advanced early readers of about 160-240 pages and the more adult world of YA fiction. Hardie Grant Egmont (HGE) commissioning editor Marisa Pintado describes it as the ‘golden years of children’s reading’; ‘This is when children have both the skills and the time to lose themselves in imaginary worlds, before the pressures of adolescence loom large.’ But what happens when there aren’t enough middle-grade books to challenge children to move out of early readers? What if they’re never compelled to read YA literature, or else stop recreational reading altogether?

One children’s book specialist I spoke to insisted that middle-grade fiction was at its healthiest and bestselling right now: ‘In Australia we are really lucky to have a wealth of great writers in this area—Morris Gleitzman, Andy Griffiths and Paul Jennings, as well as Jacqueline Harvey, Jen Storer, the “Our Australian Girl” series, John Flanagan, Oliver Phommavanh and many others.’ But it’s statements like these that suggest a lack of understanding of the nuances in readerships, or even how middle-grade is distinct from both junior fiction and YA. Not all of those authors write middle-grade fiction—the likes of Andy Griffiths, Jacqueline Harvey and Oliver Phommavanh are more junior-fiction authors.

Pintado is well aware that, within the industry, there’s a lot of discrepancy about what exactly ‘middle-grade’ is and isn’t. ‘We have a lot of wonderful Australian junior-fiction series in the market, but they’re not (and not trying to be) middle-grade—they’re very much their own thing,’ explains Pintado. ‘Part of the confusion is that some of our most popular series are read widely by kids of all ages, including the group that we think of as being the traditional MG age bracket. But the fact that some eight- to 12-year-olds are reading Andy Griffiths and Anh Do doesn’t make those books MG—it just makes them engaging reads. Kids read up and down all the time.’

If there’s confusion among booksellers, teachers and parents about the difference between junior-fiction and middle-grade readerships, some of that doubt lies in the terminology. Middle-grade is an American term, reflecting their three-tiered school system—elementary school (kindergarten to US grade five), middle school (grades six to eight) and high school (grades nine to 12)—versus Australia’s students who go from primary to secondary school, so for us ‘upper primary’ to describe ‘middle-grade’ may be more apt.

That confusion and the lack of industry understanding around middle-grade may have hindered its standing in the market. ‘It’s one thing for publishers to simply publish more MG, but there has to be somewhere to sell it—and this is the heart of the problem,’ says Pintado, who adds that market penetration has ‘always been a big problem’ for its small list of MG novels. ‘It’s harder for us to get these authors into festivals, which means stores don’t order these titles in large enough quantities, and so on.’

Another factor that may be hindering the development of middle-grade fiction in Australia is what Marisa Pintado calls ‘the glamorous older sibling’.

Young-adult literature has taken up much of the limelight in recent years, with local campaigns such as #LoveOzYA and international-scale film and TV adaptations (from Hunger Games to Divergent, Shadowhunters and The Fault in Our Stars) making the YA readership more recognisable, and eagerly embraced by a larger market that now also includes adult readers. Pintado says, ‘In my experience, it’s easy to find the junior-fiction shelves in your local bookshop, and even easier to find the YA—but I often find that the MG section is non-existent, extremely small, or rolled into one of the other categories.’

Lothian children’s books publisher Suzanne O’Sullivan agrees that middle-grade is getting overlooked in favour of more high-profile categories. ‘There are definitely fewer people writing for middle-grade than there are for other age groups. I see quite a few YA manuscripts that—either because of the plot or the writer’s style—I think would be better reworked as middle-grade, but there’s a perception that YA is the hottest category right now.’

It’s partly in an attempt to tackle this readership discrepancy and invisibility that HGE last year extended their Ampersand Prize for debut authors to include middle-grade manuscripts; ‘There is significant interest in writing for MG even if it’s not always clear to booksellers and publishers exactly where the market is,’ says Pintado.

But prizes have also been known to further muddy the categorical-waters. Barry Jonsberg’s My Life as an Alphabet (A&U) was a Prime Minister’s Literary Award nominee for children’s fiction, a CBCA Book of the Year nominee for younger readers, a Children’s Peace Literature Award winner for older readers, and the winner of the Gold Inky for youth literature, as chosen by teens. The very fact that Alphabet was nominated in awards for both younger and older readers reflects the confusion around middle-grade (and sometimes even children’s literature) in Australia, and we have not designed enough awards categories to recognise and promote its differences.

Two middle-grade fiction releases this year—Iris and the Tiger (Leanne Hall, Text) and The Secrets We Keep (Nova Weetman, UQP)—display how sophisticated books for this readership can be.

Iris and the Tiger is Hall’s third book after her YA duology This is Shyness and Queen of the Night (Text). She explains the readership change-up for Iris; ‘The book is largely inspired by Surrealist art, so if I’d written it for teens then I would have had to emphasise the darker elements of Surrealism. I wanted to explore a different sort of inbetweenness—in YA fiction it’s often the boundary between being a teenager and an adult, but for this book I wanted to sit Iris Chen-Taylor at the border of childhood and adolescence. In many ways, it was a relief after writing two YA books to focus on friendships and have absolutely no crushes and “in-the-pants” feelings!’

Similarly, Weetman’s The Secrets We Keep is a tender and complex contemporary middle-grade offering that has its roots in the experiences of children in that age group; ‘I wrote this book for my eleven-year-old daughter,’ says Weetman. ‘It’s a really personal story, inspired by events going on in my family last year, and I wrote it as a way for me and her to talk about everything that was happening. I’d write during the day and come home and she’d read what I’d done and provide feedback about the emotional journey of the protagonist. She had a big hand in the story, so it was important that as a book it was pitched to her age group and not older.’

To understand the nuances of middle-grade fiction the industry needs to take the time to understand this critical stage of development. Otherwise, the category will continue to dwindle. ‘It’s already happening,’ warns Pintado. ‘Many kids go from reading Andy Griffiths to teen fiction, or else they stop reading altogether, because there’s not enough in between to grab them.’