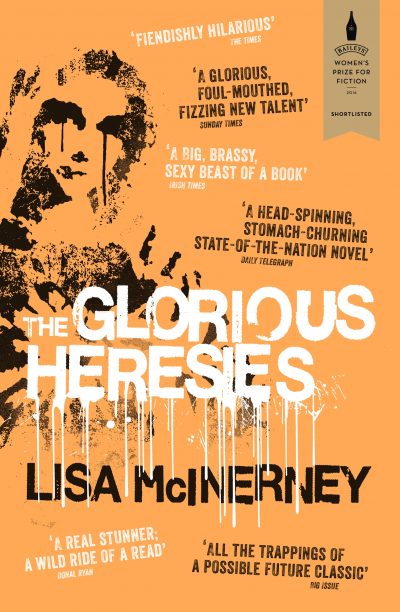 Irish novelist Lisa McInerney has won the 2016 Baileys Women’s Prize for Fiction for her debut novel The Glorious Heresies (John Murray). Chosen from a shortlist of five that included books by Anne Enright and Hanya Yanagihara, McInerney’s black comedy about a ‘messy murder’ that affects the lives of five misfits struggling in a post-crash Irish society was praised by chair of judges Margaret Mountford for its ‘fresh new voice’. ‘After a passionate discussion around a very strong shortlist, we chose Lisa McInerney’s The Glorious Heresies, a superbly original, compassionate novel that delivers insights into the very darkest of lives through humour and skilful storytelling,’ said Mountford. Head of content at Foyles.co.uk Frances Gertler told the Guardian that the win was a ‘brave choice … by the least conventional and edgiest writer on the list’, predicting the win ‘won’t please everyone’. However, Mountford said the judges, comprising journalist Naga Munchetty, singer Tracey Thorn and writers Laurie Penny and Elif Shafak, were ‘united in the view that this is a wonderful winner’. The £30,000 (A$58,170) prize was established in 1996 and is presented annually to the best novel of the year written in English by a woman. As previously reported by Books+Publishing, the 2015 prize went to Ali Smith for How to Be Both. For more information about the prize, click here.