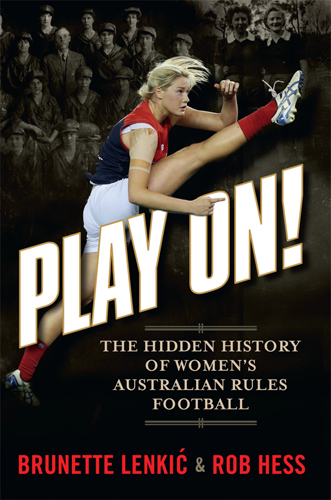 Play On! is a meticulously researched chronology of the genesis, evolution and trials of women’s footy. The sport has long been buried beneath the budget and reverence of men’s football, and undermined by gender essentialism. Brunette Lenkić and Rob Hess unearth evidence of the existence of female footy players in the 1850s with press reports on ‘the fairer sex’ in a Melbourne parklands game. Wartime sparked formal matches: in 1915, Perth department store Foy & Gibson organised a game between factory workers and shop girls to fundraise for the war effort. This began official women’s games, which were originally only permitted as trivial entertainment. In its span from the 1800s to 2015, the book records these often humiliating environments. We read about the public denigration of players: newspapermen, doctors and priests criticised women for being ‘determined to equal men’; we discover the lack of access to facilities, a struggle that continues in present day. In the foreword, Western Bulldogs vice president Susan Alberti writes: ‘We are now on the eve of the establishment of a national women’s league.’ It can only be hoped that Play On! contributes to this fight by demonstrating women’s enthusiasm and inclusion for over 150 years.

Lou Heinrich is a journalist, writer and copywriter