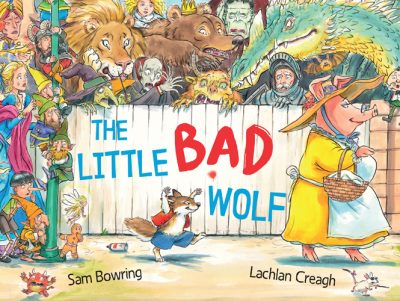 The big bad wolf (now retired) has a bit of nasty reputation but his grandson is quite mischievous too: ‘Trouble was his favourite thing to make.’ Set in a fairyland landscape populated by giants, wizards, kings and ogres, the story follows the little bad wolf as he goes about terrorising the neighbourhood. He tries to scare Mrs Pig as she hangs out her washing but she merely laughs at his miniature size. He tries to blow her house in but all he manages to do is rattle the screen door. Poor little wolf can’t seem to catch a break … Eventually he hits on a brilliant idea and blows Mrs Pig’s washing off the line, and blows away her neat pile of raked leaves and the letters from her mailbox. But little does he know that he’s actually doing her a favour! Young kids will enjoy the little wolf’s naughty antics (that eventually backfire). Sam Bowring has a lot of fun playing around with traditional fairytales, and the book is best for children who are familiar with them. Lachlan Creagh’s busy illustrations also ensure that there are plenty of well-known characters, such as Pinocchio, Puss in Boots, gingerbread man and Humpty Dumpty, to spot.