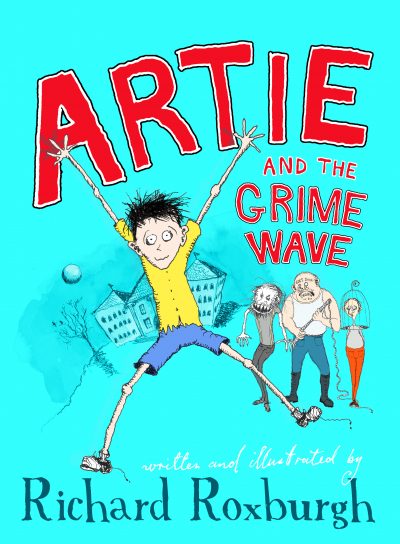 This action-packed story of small, skinny Artie and his best mate Bumshoe reads like an old-fashioned ‘boys’ own’ adventure. Artie is constantly being picked on by the school bully Nate Grime, son of the local mayor. The town they live in is suffering a crime wave, with furniture, jewellery and even household pets being stolen. Nate has just taken Artie’s only pair of shoes and he will be in big trouble when he goes home, so Bumshoe suggests using bark from a paperbark tree to make a new pair. While looking for the tree, Artie and Bumshoe stumble across a hidden cave with possibly stolen goods and realise they are on the cusp of an important discovery. A chaotic chase ensues between Artie, Bumshoe and the robbers, that will require the help of a little old lady and her wacky inventions, as well as Artie’s mum, who hasn’t gotten off the couch in years. With plenty of fart and snot jokes, and a little bit of horror, Artie and the Grime Wave is not suitable for very squeamish readers. However, this debut is a funny, fast-paced adventure, with elements of Richard Roxburgh’s famous wit, which will be popular with fans of humorous middle fiction aged between eight and 11.

Angela Crocombe is the children’s buyer at Readings Carlton