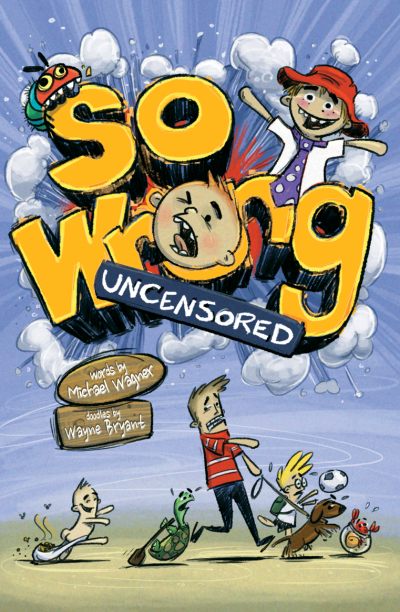 Books in the ‘So Wrong’ series will be published every six-to-nine months, with the first, So Wrong Uncensored, to be published in August. The books are written by Wagner and illustrated by Wayne Bryant.

The books are pitched as ‘a hyperactive grab-bag of wit, warmth and wildness’ with each book including short stories, satirical advertisements, ‘highly suspect “life advice”’ from ‘supposed Life Coach for Kids Mitey Mikey’, and ‘visual treats’.

Wagner told Books+Publishing the free book club website will include downloadable ‘So Wrong’-related information and activities, previews of upcoming books, ‘possibly’ some outtakes and extras that didn’t make the books, competitions, how-to-draw videos, and a ‘Reader’s Gallery’ where kids can submit their own ‘So Wrong’-inspired material.

‘We’re hoping to inspire kids who don’t like books to do bookish kinds of things like write stories, create characters, cartoons and illustrations, and, most importantly, read,’ said Wagner, adding that he and Bryant were both reluctant readers in later primary school. ‘But it’s a delicate operation getting these kids on-board and requires much subterfuge and subtlety. And it’s vital that we speak their language as much as possible.’

Wagner said they’re also looking at creating an online forum and ‘some sort of library-based club meetings’, about which they’re in ‘very early discussions’ with one Melbourne library. ‘But those two things will take a while to pan out,’ Wagner said.

Billy Goat Books are distributed through INT Books with some self-distribution to bookshops.

‘Flames’ to be adapted for screen Local news