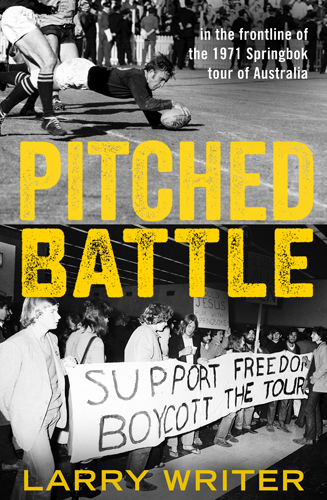 Pitched Battle: In the Frontline of the 1971 Springbok Tour of Australia (Larry Writer, Scribe)

In 1971, South Africa under apartheid sent its last sporting team to Australia. It caused an intense polarisation of opinion, demonstrations at matches and even riots in the streets. Opposition to the Springbok rugby team’s tour came from many quarters, but crucially it included several Australian rugby players who refused to play because of their objection to apartheid. Demonstrators harassed the Springboks everywhere they went and tried to disrupt matches with noise, flares, smoke bombs and even by sawing down goalposts. The authorities responded with massive displays of force leading to hundreds of arrests. The games took place behind barbed wire and police cordons. After the debacle of the Springbok tour, a South African cricket tour planned for later that year was called off by Donald Bradman, who the head of Australian cricket at the time. A year later Gough Whitlam won government and severed ties with South Africa. Larry Writer tells this amazing story with aplomb, showing admirable balance as he weaves together rugby, politics and social change. This is much more than a sports book and will appeal to all lovers of good Australian social and political history.