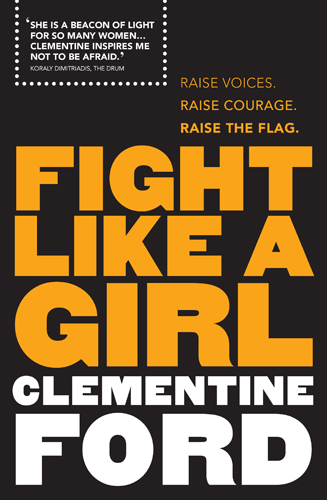 In her engaging debut, Fairfax columnist and feminist Clementine Ford surveys what it means to be a girl in the world today, covering topics from eating disorders and abortion, to online trolls, masturbation, rape culture and domestic violence. Each of these issues is explored through the prism of Ford’s own experiences, and through a feminist framework that is acutely aware of the movement’s historical limitations and its failure to adequately support women with disabilities, trans women and women across all racial and class backgrounds. As a prominent feminist commentator, Ford has been subjected to unrelenting sexist abuse online. She recounts these attacks with weary frustration, but also a sense of the absurdity and contradictions inherent in patriarchal power structures that can be so easily threatened by outspoken women. Fight Like a Girl is fuelled by Ford’s clear-eyed defiance and refusal to compromise, and by her powerful combination of personal testimony and political polemic. In the vein of Caitlin Moran’s How to be a Woman or Roxane Gay’s Bad Feminist, Ford’s book functions as a valuable primer for young people encountering feminism for the first time. It will also have broad appeal for readers seeking a thoughtful snapshot of the modern movement’s most urgent priorities.

Veronica Sullivan is Prize Manager of the Stella Prize