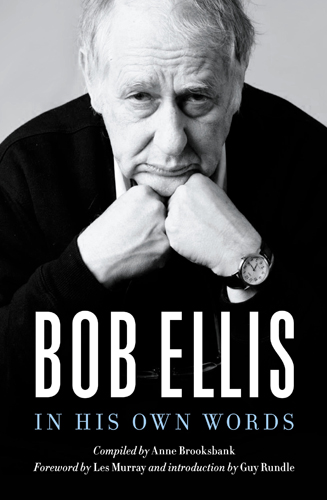 Bob Ellis: In His Own Words (Bob Ellis, Black Inc.)

Bob Ellis was an Australian journalist, writer, filmmaker, and political observer, and this latest posthumous collection of his writing, In His Own Words, is a selection of his work chosen by his widow, novelist and scriptwriter Anne Brooksbank. She includes pieces from his journalism, political writing, play scripts and film scripts, speeches, previously unpublished material and even a one-paragraph letter seeking work from 1963. One speech delivered at a school to an audience of parents is a wonderful potted history of his friendship with the poet Les Murray and the ‘golden generation’ at Sydney University in the 1960s. Bob Ellis was close to much of the political activity in Australia from the 1960s, and observed many of the Labor Party leaders in action. He also writes about standing for federal Parliament in 1994 against Bronwyn Bishop in the seat of Mackellar. The Australian film industry, Aboriginal land rights and the environment also feature prominently. As a commentator on so many aspects of Australian life Bob Ellis was forthright in his opinions: his prose is always engaging, full of dark wit and humour. In His Own Words is a reminder both of his prodigious output and his place as a strong voice in Australian journalism and culture for half a century.