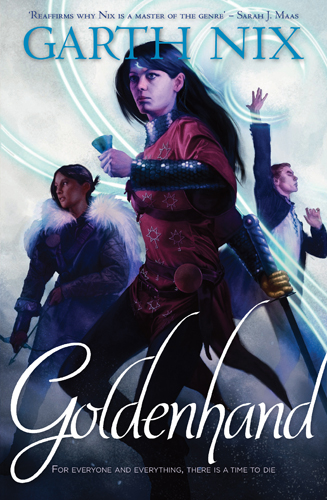 Fans of Garth Nix will be delighted to return once again to the world of the ‘Old Kingdom’ series, with Goldenhand plunging the reader straight back into where Abhorsen left off 13 years ago. Second assistant librarian Lirael is sent an urgent summons that reunites her with Nicholas Sayre. Unsure of what to make of the Free Magic inside Nick (or her growing feelings for him) Lirael takes him to her old home in the Clayr glacier. While Lirael and Nick grow closer, a young warrior from the nomadic tribes, Ferin, is on the run, carrying an urgent message for Lirael that concerns the terrifying Witch With No Face. Failure to deliver the message will mean nothing less than the destruction of her tribe. This is the book that fans have been waiting for, one that ties up loose ends and reunites us with beloved characters. It’s great to see Lirael grow as an Abhorsen, and Ferin is an excellent addition to the series—her chase scenes and the mythology surrounding the tribes are utterly engrossing. This is perfect fare for readers aged 12 and up looking for an original fantasy world. The only caveat is that this isn’t a standalone novel, and after so long since the release of Abhorsen, even some ‘Old Kingdom’ fans may need to reread the previous novels before embarking on Goldenhand’s journey.

Holly Harper is a bookseller at Readings