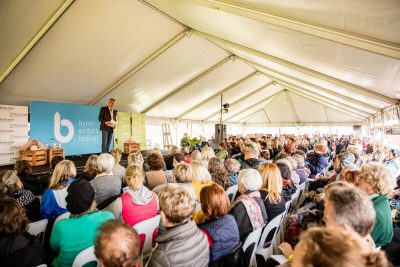 Box-office takings were up 14% and more than 70,000 guests attended the 20th Byron Writers Festival, which was held from 5-7 August.

The record crowd was ‘particularly gratifying for the organisers considering the festival almost didn’t happen’, said director Edwina Johnson. On the night of 3 August winds up to 113kph ‘ripped through the festival site, tearing apart marquees and flooding the grounds with torrential rain’. However, after an emergency meeting the next day, Johnson and festival founder Chris Hanley ‘galvanised the festival team, an army of volunteers and several local companies, who worked around the clock to rebuild the site and pump out water in order for the festival to open the gates to sell-out crowds on Friday morning’.

Johnson said it took ‘a gargantuan effort’ to open the festival and thanked the team, volunteers, partners and other community members who ‘went above and beyond to make it happen’.

Johnson said the festival was ‘full of history-making moments like Stan Grant’s Thea Astley Lecture that people will continue to talk about for years to come’. Friday, Saturday and three-day passes to the festival sold out, as did feature events including a literary dinner with Annabel Crabb and Leigh Sales, a Paul Kelly concert, and talks by Wendy Whiteley and Michael Leunig. In total, more than 150 guests featured in more than 120 on-site sessions, with four days of schools programming also reaching more than 4000 students.

Mary Ryan’s Byron Bay was the festival bookseller for the second year in a row. The bestselling books were: