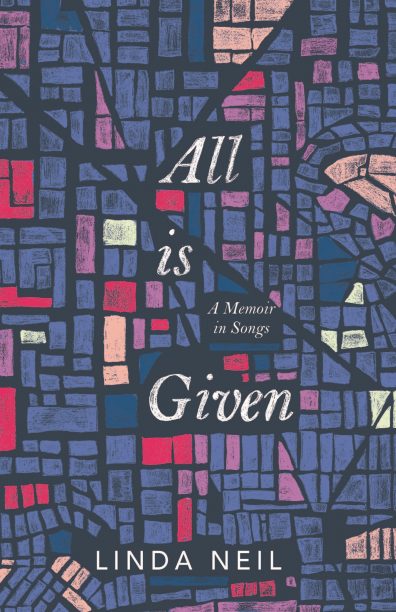 All is Given: A Memoir in Songs (Linda Neil, UQP)

Linda Neil’s beguiling memoir All is Given deserves to be read by anyone with an ounce of adventure or romance in their soul, albeit with a touch of caution. As the writer herself says early on, ‘if some events depicted did not happen the way they are described, perhaps they should have’. The book commences with a revealing account of a one-on-one dinner in London with the late Spike Milligan before moving on to other locations and encounters: Shanghai and the African-American activist Vicki Garvin; Kathmandu with stuttering Israeli Gabriel; Paris with musician Fabian, who persuades her into a small recording studio; Kolkata, working in one of Mother Teresa’s hospitals for the destitute; and Paris, where the author tells us about her fascination with Greta Garbo and its beginnings in her Queensland childhood. Though her cafes of choice are Starbucks, other aspects of her life to date are much more unconventional. The book’s title promises songs and yes, they are there; Neil is a musician and music features in some of her encounters but the heart of the book is elsewhere—in the cities and countries, the people met and befriended, and the life journey described with skill and economy.

Max Oliver is a retired Australian bookseller and enthusiastic traveller