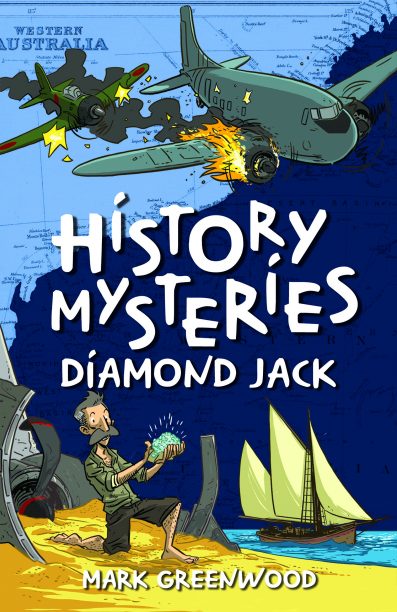 Even as World War II rages, Jack Palmer spends his time on his boat wandering up and down the coast of Western Australia. Meanwhile, the Imperial Japanese army are on the attack, driving the Allies out of Java and forcing Captain Smirnoff to pilot one of the last planes out, carrying a secret cargo and bound for Broome. But Broome is under attack too, and Smirnoff is shot down. While Smirnoff’s crew struggle to survive, Jack stumbles on the crashed plane and its secret treasure. Diamond Jack is the first book in a new series called ‘History Mysteries’ by author Mark Greenwood. Greenwood has a strong track record in writing engaging historical stories for YA and younger readers, including Jandamarra, Ned Kelly and the Red Sash and Simpson and His Donkey. In this book, he has brought to life a lesser-known incident in Australian history that combines war, bravery and a lost treasure. The use of photographs lends immediacy and reinforces that this is indeed a true story. Greenwood ends with a timeline, a discussion of primary and secondary sources, and suggestions for further reading on the case. A fascinating tale well told, this book is highly recommended for curious upper-primary kids.