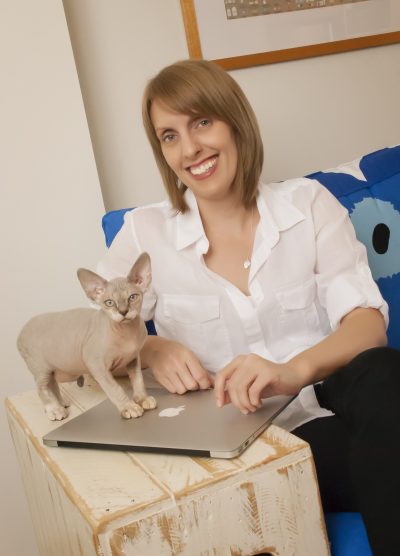 Allison Rushby’s middle-grade novel The Turnkey is a ‘page-turning mystery’ set in London’s Highgate Cemetery during the Blitz. Reviewer Maria H Alessandrino spoke to the author. Read her review here.

Time and place are crucial elements in The Turnkey. How did the setting shape your story?

It was the setting itself that gave me the idea for The Turnkey. I was living in Cambridge at the time and decided I wanted to write something that was very, very English and just for me. I sat down with a notebook and began to jot down all the things I loved and wanted to cram into the one story. This included Victorian cemeteries, London, ivy, history, WWII, foxes, tea and all other sorts of strange bits and pieces. Learning more about London’s Victorian cemeteries seemed a logical place to start, so I began reading around and within about five minutes, I’d learned that there were seven Victorian cemeteries built on the outskirts of London in the 1830s and 1840s (they have since been given the nickname the ‘Magnificent Seven’). I found a map of the seven cemeteries and something jumped out at me—because the cemeteries had been built on the outskirts of the city, they’d formed the shape of a loose circle. A ring. A shape of power. As soon as I saw that, I knew my story wouldn’t be about just one cemetery, but that all seven of these cemeteries would be important in their own way. I was looking at a whole new world—the world of the dead of London. It took a little longer for me to work out how to combine the ring of cemeteries with WWII. It was after quite a bit of reading that I stumbled upon the Nazi’s interest in the occult, which gave me the idea of how the worlds of the living and the dead might be bridged.

How do you approach researching for a novel like this and is it hard to know when to stop?

It was definitely hard to know when to stop, because the research was so interesting! I read many, many books—from long and involved histories about each of the cemeteries themselves, to how the dead have been dealt with in London from the very beginnings of the city, to accounts of Himmler’s involvement with the occult. I joined all of the cemeteries’ historical societies (The Friends of Highgate Cemetery, The Friends of Kensal Green Cemetery, etc) and read their newsletters each month. And when things got way out of my depth, I employed a fantastic historical researcher, Heather Gammage, who helped me to really dig for some of the facts that I needed that weren’t so easy to find. It’s amazing how much of this research I needed to write the story, but didn’t end up using in the actual book. I think it’s probably the same for every writer who writes historical novels. The novel is the tip of the iceberg—the part the reader can see—but it’s bolstered by all that invisible research, hiding under
the waterline.

The Turnkey’s role is to care for the interred and keep them happily at rest. How did you come up with this original concept?

The concept of there being a world of the dead within the ‘Magnificent Seven’ cemeteries of London came first. I then had to ask myself what the dead were up to in this world. Were they out and about in the city, or were they confined within the cemetery walls? I worked out that, for the most part, I wanted them to be happily at rest. Thus, I needed someone to make sure this could happen—a Turnkey.

Some of the supernatural concepts in the novel can be scary for young readers. How did you find the right balance for your readership?

When I first had the idea for the novel, I did wonder whether it would be better suited to a young-adult readership because of the involvement with the supernatural. But the more I thought about it, I realised it was actually quite a comforting thought—that there is care and love and new connections to be made in the afterlife. That a new kind of family can be formed. When I saw that Flossie would do her utmost to care for her charges—all the interred at Highgate Cemetery—I knew the story would be perfectly suited to a middle grade audience. When a young early reader told me she kept forgetting almost everyone in the story was dead, I was so pleased. This was exactly what I wanted—the feeling of a whole other non-scary world going on apart from the world of the living.

You’ve written books for middle-grade and YA readers. Do you find it hard to move between the two, and do you have a preference?

They’re such different areas that whenever I come up with a story idea, it’s usually obvious fairly early on whether it will be more suitable for a young-adult or a middle-grade audience. While I love the excitement of taking characters into the more adult world of young adult, I think I do have a soft spot for the wide-eyed world of middle grade where things are fresh and new. There’s so much room for heart in middle grade, which I just adore about it.

Can we expect to see more adventures for Flossie Birdwhistle? What are you working on next?

I’d originally planned a trilogy for Flossie, continuing her tale through different time periods. Because she doesn’t age (and neither does anyone around her), it was an interesting concept to play with. I’ll see how I go! In the meantime, I’ve completed a standalone middle-grade manuscript about a girl and an evil mulberry tree that I’ll soon be busy editing. I’ve also just started another standalone middle-grade manuscript about a girl who finds a way to enter her favourite fictional world.

The Turnkey is published by Walker Books in March