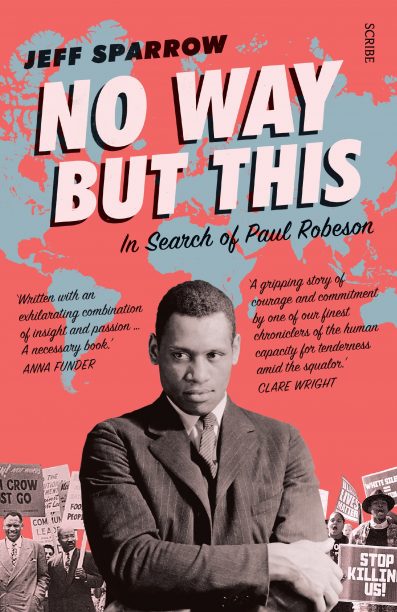 No Way But This: In Search of Paul Robeson (Jeff Sparrow, Scribe)

Paul Robeson (1898-1976) was an African-American singer, actor and political activist. His father was a slave, yet Robeson was able to carve out an acting and music career despite facing deeply entrenched racism. As Robeson’s acting roles took him across the world, he became a supporter of socialist political causes. A commitment to the philosophy of the Soviet Union, however, would bring him undone. He was blacklisted during the McCarthy era and when the full horrors of Stalinism could not be denied, he experienced a personal crisis. Avoiding the usual straight biographical format, Melbourne writer and academic Jeff Sparrow has opted for a mix of essay, journalism, history and biography to produce something engaging, original and insightful. Sparrow travelled the world as research, visiting places critical to Robeson’s political and spiritual formation—Spain, Wales, America, Britain, Russia—and walking in his subject’s shoes. These sections, involving discussions with historians, activists and friends, lift the book out of what could have been a pedestrian tome into something more urgent and compelling. Fascinating, instructive and full of astute observations on race and politics, No Way But This: In Search of Paul Robeson will appeal to readers passionate about social justice and the history of 20th-century political movements.