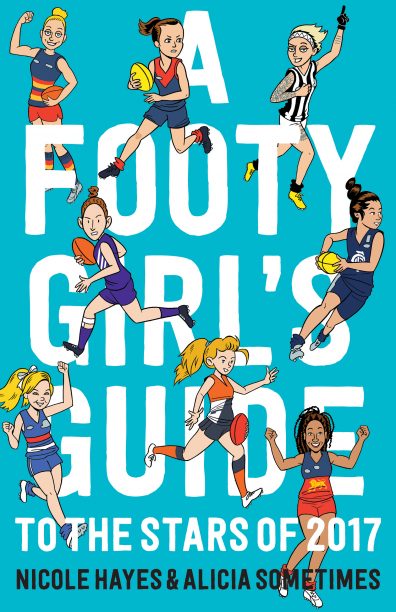 Black Inc. has acquired the rights to A Footy Girl’s Guide to the Stars of 2017, a children’s book by ‘Outer Sanctum’ podcast hosts Alicia Sometimes and Nicole Hayes, which profiles some of the players taking part in the first season of AFL Women’s next year.

The book will look at how key players made it to the top of women’s football, and offer other ‘inspirational stories and fun facts’.

Black Inc. head of marketing and publicity Kate Nash told Books+Publishing the publisher ‘hopes that the book will encourage girls and boys to support the new women’s competition, and inspire girls in particular to take up footy while encouraging kids to participate in sport more generally’. School events are also being planned around the book.

Sometimes and Hayes told Books+Publishing that in interviews with the footballers ‘one thing came up over and over again … early on they didn’t even reach for the dizzying heights of football stardom because they didn’t think that it was something they could go for, that somehow it was “natural” that only men got to play later in life’.

‘We hope young boys and girls are inspired by the words of the players and see a little bit of themselves in what they say,’ said Sometimes and Hayes. ‘We hope young girls see that footy is not only a possible career path for them but that it is also something that is entertaining and embracing because they get to read about strong, capable women who are doing what they love.’

The book will be released in February next year. The eight-team AFL Women’s season runs for eight weeks in February-March.