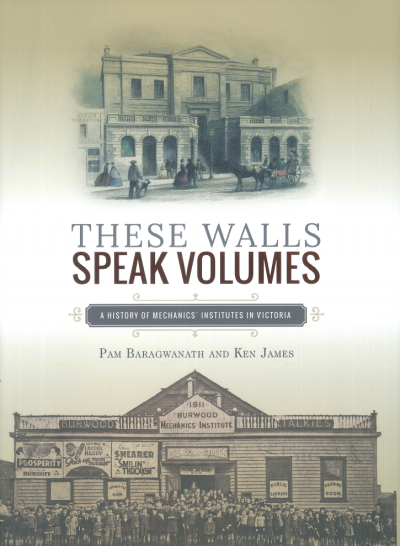 Pam Baragwanath and Ken James have won the top prize at the 2016 Victorian Community History Awards (VCHA) for their self-published book These Walls Speak Volumes: A History of Mechanics’ Institutes in Victoria.

Baragwanath and James’s book, a 704-page collection of nearly 1000 entries recording the history of Victoria’s free libraries and mechanics’ institutes, was awarded the $5000 Most Outstanding Community History Project. The judges said the volume ‘makes a strong and welcome contribution to our knowledge of the role of this local, independent, self-funded and self-help voluntary system in the significant and almost universal movement for public education’.

Magda Szubanski was awarded the Judges’ Special Prize for an outstanding entry for her autobiography Reckoning (Text), which was praised as a ‘remarkable book’ that’s ‘original, powerful and written from the heart’.

The Victorian Community History Awards are presented by the Public Record Office Victoria in partnership with the Royal Historical Society of Victoria, and are funded by the Victorian Government. For more information, click here.