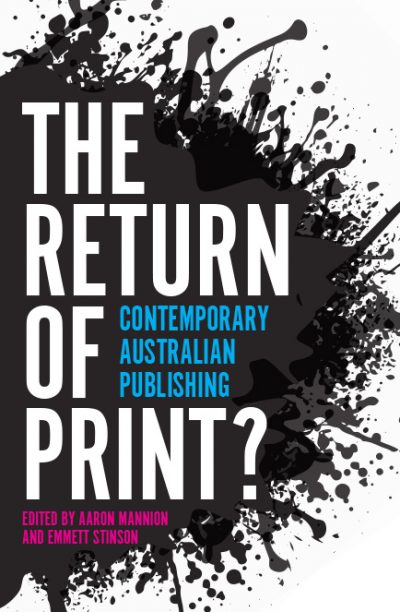 Is female leadership in publishing impeded by motherhood?

In this edited extract from The Return of Print? Contemporary Australian Publishing (ed by Aaron Mannion & Emmett Stinson, Monash University Publishing), Sarah Couper interviews several women in senior positions in trade publishing in Australia about the challenges of balancing motherhood and career advancement.

Most of the participants [of my study into gender and leadership in Australian trade book publishing] had juggled work and the responsibility of being the primary carer for young children. Many had also had staff with small children. Words such as ‘challenge’, ‘torn’ and ‘struggle’ were often used to describe the clash between family and work.

The participants all held the view that, in culturally stereotypical terms, the child-rearing role still falls disproportionately on mothers. Most of the mothers in the group had, in their own ways, struck some sort of balance. This had involved a careful compromise between work and home.

Some of the participants were pragmatic when I asked them if they thought senior part-time work existed for working mothers in the publishing industry. For example, Foong Ling Kong, who was working as a publisher at Allen & Unwin at the time, said: ‘Unfortunately, you do have to work full-time to maintain a presence’.

Along similar lines, [Melbourne University Publishing CEO Louise] Adler told me that working mothers will usually have a ‘five year lull’ in their careers. Adler had her children when she was working at Reed Books in the 1980s and insisted on leaving work at 4pm each day when they were young. She recognised that this might, at least in the short term, have consequences for her career.

Adler displayed obvious sympathy for the challenges working mothers face, but thought that a truly satisfying balance verged on the unreachable. She said: ‘I understand being torn and I am sad that not much has changed since the second-wave of feminism in the seventies argued that the personal is political. I watch young mothers in the publishing industry today and realise nothing has changed.’

When I visited Melbourne University Publishing to interview Adler, I met two of the company’s current working mothers, both with young children. Both women were working part-time and were reasonably content with the division between their working and home lives. One of the women said: ‘You choose. When you have young children you make choices about the flexibility you need in the short term’.

Kong, who also happened to work under Adler at Melbourne University Publishing when her child was younger, was clear that a satisfying balance is difficult to strike, particularly within the structure of a traditional workplace: ‘I’ve always said [to employers], “number one, my child is not negotiable. Number two, I’m not going to work full time. Even if you want me to, I don’t want to work full time”. But what always happens in this industry, of course, is that everyone who works part-time packs a full-time load into those hours.’

Kong thought that freelancing work sometimes offers working mothers a more satisfying balance. Kong has done extensive freelancing and argued that it put her in a position where she could control her workload. However, as Kong pointed out, the Australian market only allows for a small number of successful, senior freelancers at any one time. Successful freelancers must have extensive industry experience and a proven aptitude for the work. So it is unlikely to be a viable option for most working mothers, particularly young working mothers who do not have the requisite experience.

Indeed, those participants who have come closest to senior part-time work were in senior roles before having children. For example, Jackie Yowell, who had a child when she was working at Penguin in the 1980s, described delaying having children because of the pressure and time-commitment of her career: ‘I didn’t have a baby until I was 37 partly because I couldn’t see how I could fit it in, really’. Yowell was able to negotiate her career as a working mother in light of her previous success, which essentially became a bargaining chip; Penguin held her job when she took leave after her child’s birth and, when she returned, ‘grudgingly accepted’ that she would cut back to four-day weeks.

However, Yowell still found re-entering the workforce difficult. At the time, she was afforded less flexibility (to work non-traditional hours or from home) than many mothers are today. She struggled being away from her child and, at one point, approached the managing director at Penguin about setting up an in-house crèche modelled on one established by McPhee Gribble (‘They got the staff they needed to run it and they had their babies at work with them. It was wonderful for them,’ she said of the McPhee Gribble crèche). Management at Penguin opposed the idea.

This has not changed since; the only participant who mentioned bringing her children into the workplace was Zoe Dattner, who co-runs Sleepers Publishing with Louise Swinn. Like freelancers, mothers running their own business, such as Dattner and Swinn, are in the fairly unique position to approach motherhood and work on their own terms. For Dattner, this translates to bringing her children into the workplace as well as ‘a restructuring of home and working roles between my partner and I’. Swinn, who recently had her second child, was, at the time of our interview, working most of her hours from home. She said, ‘it involves a lot of evening work and working during nap-time, catching an hour here and an hour there, and weekend work at the moment’.

Prior to starting Sleepers, Dattner worked at a large educational publisher and recalled feeling anxious when her co-workers left to have children and, most often, did not return to the workplace. She blamed this on regimented office culture that allowed working mothers little flexibility: ‘I thought, when the time comes, what are my options?’

In an article she wrote for Books+Publishing, Dattner noted that old office culture lingers in many of the industry’s workplaces, limiting its working mothers (and indeed, its working fathers). Elaborating in our interview, she said, ‘Part-time hours are perceived as your capacity to work somehow being less’. She rejected this notion, and argued that it translates to an industry that ‘underutilises really, really, really smart people’ and particularly women. Contrary to the notion that the work-family clash is unresolvable, Dattner argues that the industry could become more flexible towards its working mothers by allowing them to work from home and within less-structured time frames.

Swinn argued that the wider industry needs to shift towards ‘a more family-friendly attitude towards things like properly paid maternity leave and paternity leave and family obligation time’. However, as publishing is not a high-profit industry, its workplaces often have limited resources to assist working mothers. Many of the participants pointed this out. Most publishers, particularly small publishers, may not be able to afford to subsidise childcare services (internally or externally) or pay maternity or paternity leave beyond what is legally required of them. This, undoubtedly, adds to the strain of its working mothers.

Sophy Williams was another who has had some success balancing her work and home spheres. Again, this is largely because she already held her position as CEO at Black Inc. when she had her first child. She described renegotiating the structure of her role in the lead up to having her first child: ‘I had to set a precedent when I had my own family. I had to think about the rights and privileges I was giving myself and I had to make sure they extended to my staff. Since I was the first person to go and have a couple of kids while I was still working, I thought very long and hard about what the company should accommodate.’

The quantitative and qualitative findings suggest that the independent publishing scene allows its working mothers greater flexibility than the larger commercial houses. Many of the participants made arguments along these lines. However, career-ambitious women who have children before breaking into the industry’s senior ranks do seem to have limited options: work full-time from the office and limit their time with their children; work part-time and expect their careers to lull; or stop work and hope the opportunity presents to re-enter if and when they choose.

Sarah Couper is a Sydney-based writer and editor. In 2013 she investigated the status of female leadership in Australian trade publishing for her Master of Publishing and Communications at the University of Melbourne