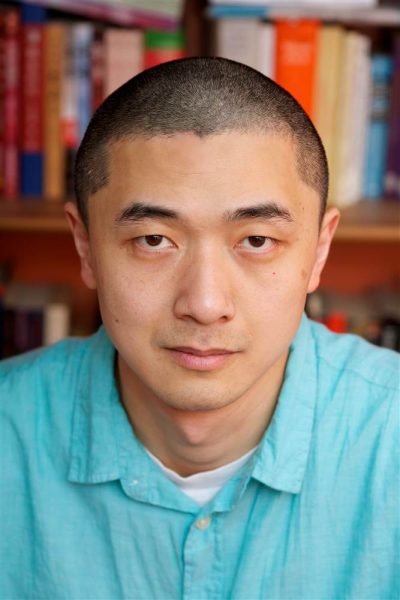 Writer and translator Ken Liu is at the forefront of bringing Chinese science-fiction to an English-language market, having translated the Hugo Award-winning The Three Body Problem (Liu Cixin) and edited the first English-language collection of contemporary Chinese SFF, Invisible Planets. His own short-story collection, The Paper Menagerie, won the Hugo, Nebula and World Fantasy awards. His latest book is The Wall of Storms, book two in the ‘Dandelion Dynasty’ series. (All imprints Head of Zeus.) He is attending Perth Writers Festival.

I’d probably include the map and cover of The Wall of Storms, and the following quote: ‘“Silkpunk” technology delivers enough excitement and sense of wonder to enchant any fan of epic fantasy.’—Publisher’s Weekly.

I’m reading the manuscript of an alternative history novel by Gu Shi, an amazing Chinese writer who writes across multiple genres. In this novel, she imagines a world in which Wu Zetian, a Chinese Emperor who seized the throne from her son, managed to establish and secure a dynasty of her own in which daughters as well as sons can ascend to the Imperial seat. I’m also in the middle of Aliette de Bodard’s gorgeous House of Binding Thorns (Gollancz).

I’d like to get to Neil MacGregor’s A History of the World in 100 Objects (Penguin). Ever since visiting the British Museum last year, I’ve been fascinated by its collection and this unique approach to history.

Pilgrim at Tinker Creek by Annie Dillard (HarperCollins UK). Transcendentalism is one of the most unique contributions of American thought to philosophy, and Dillard is its best modern voice.

Probably Jin Yong’s martial arts novels. All of them were wonderful and shaped my approach to narrative in indelible ways.

I wouldn’t want to be a literary character at all. I like my own life too much.

I like to talk about books with friends and colleagues in person. Rather than reading about books, I like to just read books.

Digital. However, I think electronic books have been far too reliant on imitating physical books. Only when they are freed from the constraints of being merely an electronic version of the traditional codex (which, by the way, is only one stage in the evolution of books from tablets to scrolls to codices to swirling electrons on a screen) can they achieve their full potential.

Written by artificial intelligence in large numbers. If I live that long, I hope to see a book composed by an AI win a major literary award or top the bestseller lists.