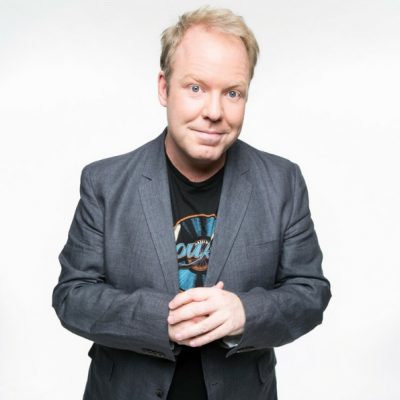 Comedian Peter Helliar’s first children’s book Frankie Fish and the Sonic Suitcase (HGE, February) is a time-travel adventure starring 12-year-old Frankie and his cranky grandad, who has a hook for a hand. Helliar spoke to Books+Publishing about the challenge of writing for kids.

What made you want to write a children’s book?

I’ve always loved writing. As a kid in primary school, I would write books and design the front cover and staple them neatly together. The teachers would let me read them to the entire class. I had a name for my ‘publishing company’. It was Better Books and even had its own logo that was on the front cover of all my books. I loved the anticipation other kids had, real or imagined, when I got to read my new book out.

As an adult, writing a book has always lurking in my mind, but life has been very busy. I didn’t want to do it half-hearted. One day I had the realisation that I will never make a Pixar film while my kids are still kids, so my thoughts turned to writing a book for them and their friends and hopefully, kids everywhere.

What was your inspiration for Frankie Fish and the Sonic Suitcase?

I really wanted to write about a loner who gets to escape to another land or reality. It could have been a fantasyland or a dreamworld. I think the biggest inspiration was Enid Blyton’s The Magic Faraway Tree—I loved how Jo, Bessie and Fannie would have these crazy adventures. In the end, I decided to base it closer to reality. I wanted it to be about family and also the notion that you really only need one good, true friend. The other influence once the time travel aspect was introduced was Back to the Future. The amount of times I had to fight the urge the have a bolt of lightning hit a Town Hall clock tower was too embarrassing to admit.

Did you feel you were drawing on your comedian background while writing? Did it make you think about humour differently?

I didn’t think about it much at all. Humour is important with this age group, but I never underestimated how much the kids want to hear or read a good story. The humour came reasonably naturally but once I had the story right, I could go back and pepper and season it with more gags and comedy. But to be absolutely honest, story was king.

How difficult was this book to write? What surprised you about the writing process?

It was more challenging than I imagined which I’m glad about—I like a challenge. I was up for it. I didn’t enter this world lightly. I think the fact that it was my first book and it was also a time-travel adventure made it seriously challenging because, outside of Back to the Future, it’s not a genre or concept I’m completely across. I’ve never even seen an episode of Doctor Who. When somebody pointed out that they enjoyed my homage to the sonic screwdriver with the sonic suitcase, I had no idea what they were talking about.

What can we expect next from you as an author?

There will be at least two more Frankie Fish adventures. I am writing the second one as I speak. I have another idea for the next age group and a couple of picture books. I like the idea of doing a book of short stories too. But right now, it’s all about Frankie Fish.

Undermajordomo Minor by Patrick DeWitt (Granta) was incredible. Jen Byrne told me to read it and I’ll be forever grateful that she did. It was like a deconstructed fairytale. Brilliant, odd and hilarious.

The state of accessible publishing in Australia  Features

A year of transformation: The industry reflects on 2020  Features