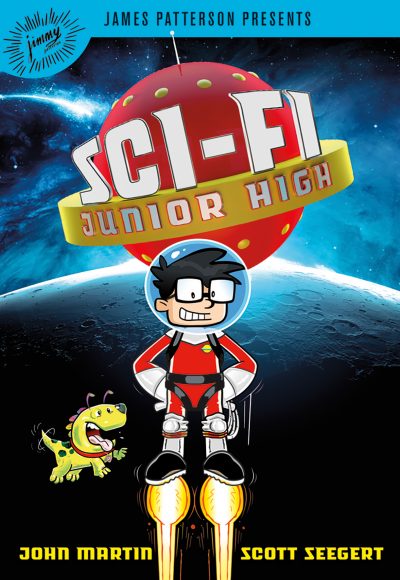 As the son of two supergeniuses, Kelvin Klosmo has Mighty Mega Supergenius-sized shoes to fill … The only trouble is his supergeniusness hasn’t quite kicked in yet. When Kelvin’s parents are offered the opportunity to head up a top-secret robotics project at the Galactic Science Hub, Kelvin finds himself on the other side of the universe attending Sci-Fi High with a host of weird and wonderful aliens. But Kelvin’s family aren’t the only newcomers at the Hub—someone else has arrived, and he’s got dastardly plans in mind. Can Kelvin’s not-quite-supergenius smarts save the universe from disaster? This novel from John Martin and Scott Seegert fills the gap between comic books and middle-grade fiction, with a narrative that alternates between text and clearly laid out cartoons. The chapters are short and highly illustrated, but the language is fairly advanced so it’s recommended for confident readers aged 10 and up. The combination of space adventures, curious creatures and comic misadventure makes it a fun book for fans of Star Wars and Guardians of the Galaxy, but readers looking for more depth of character and narrative may find it lacking.