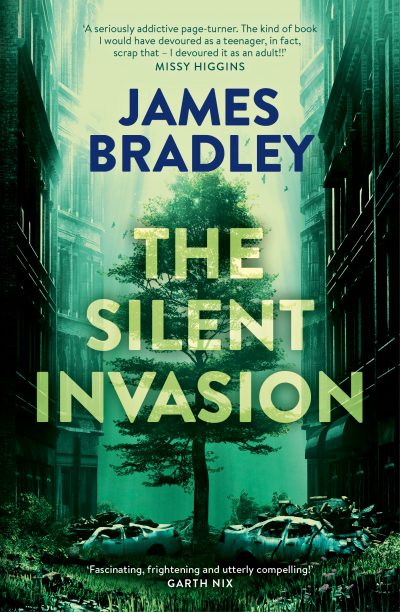 Callie was six when the Change came to earth. She’s 14 now, and the world’s a different place. The Change, a mysterious illness spread by alien seedpods, has thrown humanity into chaos, and now people, plants and animals are gradually becoming infected. Those who get sick are taken by Quarantine and never seen again—so when Callie’s little sister Gracie shows the telltale signs of Changing, Callie knows they must run away to the mysterious Exclusion Zone. But she’s not prepared for what she discovers when she gets there … The Silent Invasion is part one of a new trilogy by Australian novelist and critic James Bradley. Although it’s his debut YA book, Bradley’s no stranger to dystopias: two of his adult novels are also set in not-too-distant futures where climate change and political oppression threaten humanity’s survival. It’s this element of familiarity—a world not quite our own, but close enough to seem feasible—that makes The Silent Invasion so effective. While it’s fundamentally a thriller with a page-turning plot, it’s also a measured, thoughtful exploration of survival in a landscape at once recognisable and unknown. With its timeless themes of identity, connection and love, this is a gripping read for teens and adults alike.