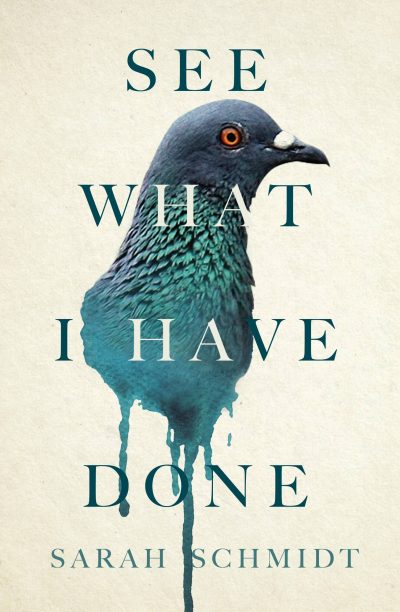 See What I Have Done (Sarah Schmidt, Hachette)

Like Hannah Kent’s Burial Rites and Laura Elizabeth Woollett’s The Love of a Bad Man, See What I Have Done is based on true crimes committed by women. In 1892, 32-year-old Lizzie Borden was tried and acquitted of the brutal axe murder of her father Andrew Borden and her stepmother Abby. They were murdered in their home in the Massachusetts town of Fall River. Through the voices of the protagonists, Sarah Schmidt constructs a gruesome and disturbing portrait of a pathologically dysfunctional household. There is the cruel and authoritarian father who plays his children off against each other; the ineffectual, neurotic stepmother; the unbalanced, delusional younger daughter; her sister, who is trying to escape; the exploited Irish maid; and a weird, manipulating uncle and his even weirder sidekick. Mix all these together and add the mysterious killings and you get a grand gothic novel reminiscent of its antecedents in American culture such as A Streetcar Named Desire and Who Killed Baby Jane. That it’s done so well and so compellingly by an author from suburban Melbourne makes it all the more surprising. I found it disturbingly confronting—watch out for the mutton broth and the vomit—but couldn’t stop reading it!

Mark Rubbo is the managing director of Readings