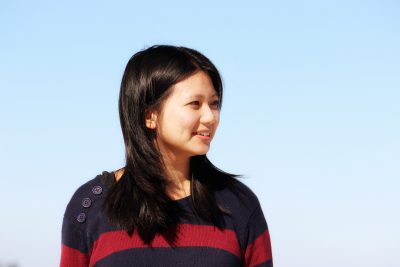 Elizabeth Tan’s Rubik is a novel of interconnected short stories with plotlines that explore ‘a sprawling world of shady corporations, sentient memes and hackable bodies’. The result is ‘conceptually and structurally breathtaking’, writes reviewer Alan Vaarwerk. He spoke to the author.

The narrative/narratives in Rubik are sprawling and complex. How did you go about composing the book and fitting the pieces together? Did you conceive of the stories individually and then fill in the gaps, or was there a master plan?

It was perhaps a little bit of both—while there were periods of time when I’d be intensely focussed on developing an individual story/chapter, I would sometimes have several stories/chapters on the go simultaneously, so I could get a sense how the overarching narrative was fitting together. I suppose the writing process was a bit like the dream levels in Inception, all these tenuous, unresolved sub-narratives growing concurrently.

I understand Rubik began as a PhD project looking at the ways science-fiction tropes and iconography intrude into real life. Do you think genre elements like these can help us process the absurdity of the modern, connected world?

Yes. My favourite passage from White Noise by Don DeLillo occurs when the protagonist checks his bank balance at an ATM. It is a long, melodious passage in which the protagonist expresses his gratitude and admiration for ‘the system’, but underlying his gratitude is his fear of being rejected by the system, and the knowledge that the system doesn’t really require him to function. I think the ways science-fiction meditates on our enmeshment with technology—especially as our concept of technology as ‘machine’ shifts to a concept of technology as ‘system’, something far more nebulous, spectral, tenuous and intangible—helps us to articulate this fear of the system overpowering us and finding ourselves obsolete.

The stories in Rubik tend to loop back on themselves and inhabit multiple layers of reality. What draws you to explore such nebulous and intangible concepts?

I think this is just how I tend to be experiencing and remembering reality these days. I am terrified by how imprecisely I remember things, how my perceptions seem to fade even before they can become memories.

As well as a writer, you’re also a visual artist and webcomic creator. Do these facets of your work inform each other?

I think there is definitely an affinity between Rubik’s formation and the process of collaging: repurposing and recontextualising, bringing unlike things together, creating a flawed and fragmented whole. In general, my webcomic doesn’t really cross over with my fiction writing but I guess in both I like to find ways to undermine ‘cuteness’ or use it subversively.

What other books and authors have influenced your writing?

The books of Sonya Hartnett have been my closest friends since I was about 11 years old. The Basic Eight by Daniel Handler (HarperCollins) and Killing Aurora by Helen Barnes (Penguin) were my favourite books when I was a teenager. More recently, Pattern Recognition by William Gibson (Penguin) was a major catalyst for Rubik and my PhD thesis. The short fiction of Ted Chiang, Tom Cho and Julie Koh has also helped me to grow as a writer.

Golden Boys by Sonya Hartnett (Viking). I love the way Hartnett represents all the complex loyalties and pain that exists among children and within families, and how imprecise and inexpressible abuse and trauma can be.

Rubik is published by Brio in April

Freya Blackwood on ‘The Boy and the Elephant’ Features Interview Junior