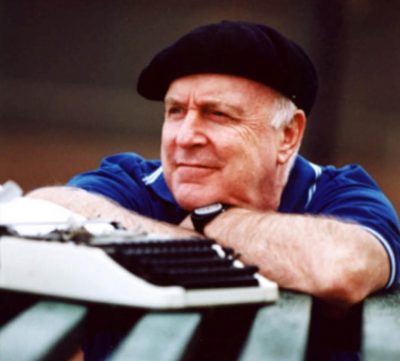 Clarke was the author of numerous books, including A Dagg at My Table, The Howard Miracle, The 7.56 Report and The Tournament (all Text).

‘Most people will know John through his satire, the interviews he and Bryan Dawe did together on television for the best part of thirty years. No politician ever got off the hook. Remember Fred Dagg, the philosopher in gumboots, or The Games, John’s fabulous response to the Olympic endeavour. Who could forget the outrageous bodysnatching scene with Sam Neill in the movie of Death in Brunswick, or his account of the adventures of the great farnarkeler Dave Sorensen. He turned his hand to so many kinds of writing, but his rule was he had to be making up his own rules. We put together an anthology of his work in a book called A Dagg at My Table.

‘John had a wonderful gift for turning things inside out and upside down, so we could see their concealed truths. In everything he did his ear was incomparable. His interview scripts are as sculpted and precise as any haiku. He loved to write puzzles in which he gave the answers and readers had to work out the questions. We published The Tournament, a book not like anything else, an intricately modelled contest in which everyone from Sigmund Freud to Hannah Arendt, from Greta Garbo to Anton Chekhov struts and frets on the tennis court until we arrive at a winner. And then there is The Even More Complete Book of Australian Verse, a deliciously clever series of pastiches of the great writers.

‘John was a good man and a great original. And his gifts went in every direction. He could write, act, direct, produce. He wanted to get things done, and he loved doing them differently. He was always introducing people who needed to know each other. He was very proud of his wife Helen and daughters Lorin and Lucia. Our hearts are with them today.’