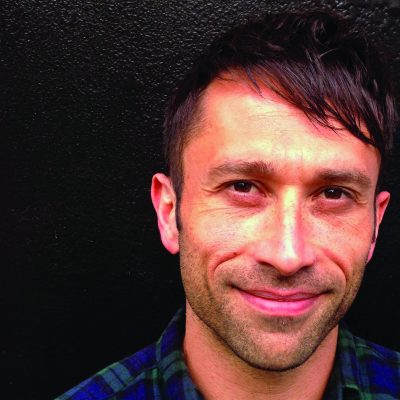 Mark Brandi’s debut crime novel Wimmera (Hachette, July) is a ‘languid and unsettling’ story about two boys growing up together in a small town in the 1980s. He spoke to reviewer Deborah Crabtree. (Read her review here.)

You won the British Crime Writers’ Association’s Debut Dagger for an unpublished manuscript for Wimmera. How did it come to fruition?

I can trace the origins of Wimmera back to my childhood growing up in a pub in country Victoria. There I encountered people from all walks of life. Some of the clientele—especially the lone wolves passing through—possessed a mysterious and sinister quality. I was born in Italy, and as we were one of few migrant families in town, I also carried some sense of being an outsider. In hindsight, this offered me distance and perspective to observe the community’s darker undercurrents.

Fast forward to 2014, and inspired by Jack London’s To Build a Fire, I wrote a short story featuring a father and son on a hunting trip. The piece was published and then broadcast on Radio National, and I thought that was the end of their story. But those characters stayed with me—I felt compelled to discover more about their world.

I think all my writing starts with character—some complex, unknowable knot that is hopefully revealed as the story unfolds. It’s a journey of discovery for me, as much as the reader. Wimmera grew from that intrigue, but didn’t arrive at its final form until early last year. Along the way, I’d been fortunate to receive fantastic support, including two residential fellowships at Varuna and a few prizes, but it was the Debut Dagger that ignited serious interest from publishers.

The three-part structure works well in this novel. Did you begin with this structure or did it develop in the writing process?

It was almost entirely unplanned. When writing the first draft, I tried to connect with the unconscious, to write with as little self-censorship as possible and hopefully gain some insight into the characters. I had a broad sense of the narrative arc, but tried to keep an open mind on where things might lead. Once the characters of Fab, Ben and Ronnie took shape, they determined the story and how it was told. From there, the plot took unexpected detours.

In early versions, I frequently shifted time and point of view. While it was enjoyable to start out this way, it made for a difficult read, so once I had a decent draft, I felt confident enough to experiment with structure. I rewrote the novel in six parts, four parts and two parts, before deciding three parts offered the most powerful narrative.

How did you come to writing? And have you always written crime?

I’ve worked in various policy roles in the justice system, including a stint as a political adviser, and my three brothers have all worked for Victoria Police, so I’ve always been surrounded by real-life stories of crime and criminality. It was probably inevitable that the darker aspects of humanity would feature in my writing, but it was a real-life crime that led me to write in the first place.

About five years ago I was cycling through Fitzroy and fell victim to a hit-and-run driver. I suffered multiple broken ribs and endured two shoulder operations, but was lucky it wasn’t much worse. The accident made me think deeply about what I really wanted to do—so I quit my career to pursue writing full-time.

While much of my writing since has been concerned with the rural experience, crime didn’t feature until Wimmera. Outside of Wimmera, I’ve published short fiction and memoir, as well as pieces for the Age, the Big Issue and the Guardian. Radio National has also been an important supporter—writing for the ear requires discipline and restraint, and it’s helped with all my writing.

Are there any authors you’d consider major influences on your writing, or any you’d highly recommend?

I enjoy lean prose. Cormac McCarthy and M J Hyland are both extraordinary—I’m not sure I will ever completely recover from The Road (Picador). In nonfiction, I’m attracted to the distinctive, intensely perceptive voice of Helen Garner. And for a quick hit of short fiction, I’d highly recommend ‘Bullet in the Brain’ by Tobias Wolff. A masterpiece.

Ideas come from my reading, but also other unexpected places. Inspiration might be drawn from real-life experience, half-heard snippets of conversation, unsettling dreams, a difficult painting, or even song lyrics. Looking back, Nick Cave was on high rotation while drafting Wimmera. I probably listened to The Mercy Seat hundreds of times, often while wondering about Fab, Ben and Ronnie, and just what might happen next.

What we can expect from you next?

I’ve got two other novel manuscripts on the go. One is largely complete, although I still might revise some aspects. It’s also set in rural Australia, and from the perspective of a young boy trying to overcome extraordinary odds. The other manuscript is (almost) ready to circulate to a few key readers. It’s a gritty literary thriller, set on the streets of Melbourne. I’m also collaborating with a London-based film producer on a screenplay for a short film. We’re currently seeking financial backers, so fingers crossed. And there are always a few short stories, quietly gnawing away at me …

The North Water by Ian McGuire (Scribner): the first chapter promised a gory, rollicking ride, and it didn’t disappoint. It’s a filthy, ripping yarn, and Henry Drax is a beast I will not easily forget.