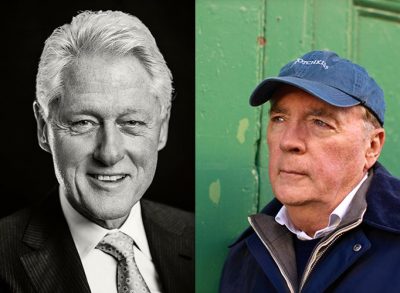 Former US president Bill Clinton and author James Patterson have teamed up to write a political thriller, which will be published by Cornerstone in June 2018, reports Publishers Weekly.

The President is Missing will be a ‘unique amalgam of intrigue, suspense and behind-the-scenes global drama from the highest corridors of power’ that draws on Clinton’s experience in the White House and the ‘details only a President can know’.

Penguin Random House (PRH) UK has acquired UK and Commonwealth (excluding Canada) rights to the book, which will be Clinton’s first novel. Clinton and Patterson’s two publishers, Knopf and Little, Brown, will co-publish the book simultaneously in the US.

In a statement, Clinton said: ‘Working on a book about a sitting President—drawing on what I know about the job, life in the White House, and the way Washington works—has been a lot of fun […] And working with Jim has been terrific. I’ve been a fan of his for a very long time.’