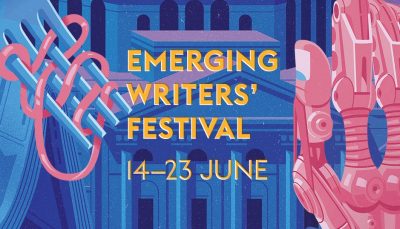 The Emerging Writers’ Festival (EWF) has announced its full 2017 program, which runs from 14-23 June in venues across Melbourne’s CBD, Footscray and Dandenong.

The festival will open with ‘an act of rebellion’ and ‘a call to action’ featuring artists and writers Rachel Ang, Michael Green, Abdul Aziz Muhamat and Omar Sakr. The opening night will also include the winners’ announcements for the Monash Undergraduate Prize for Creative Writing and Victorian Premier’s Literary Award for an Unpublished Manuscript.

The National Writers’ Conference for industry professionals will run from 17-18 June at the State Library of Victoria. This year’s guests include the previously announced EWF ambassadors Melina Marchetta, Anna Krien, Inga Simpson, Michelle Law and Rebecca-Anne Do Rozario. The conference will also include sessions on emerging programming, screen and stage writing, writing for video games, writing disability, and a session with Inga Simpson in conversation with her Hachette publisher Robert Watkins and editor Kate Stevens.

Highlights from the rest of the program include full-day masterclasses on ‘Freelancing for life’, ‘pitching in publishing’, writing YA, short stories and screenwriting; an EWF ‘high school formal’; and a Looking for Alibrandi movie night and panel discussion to celebrate the 25th anniversary of the book’s publication.

Recently appointed artistic director Izzy Roberts-Orr said she hopes the program will ‘function as both a map and a key’. ‘In celebration of all tomorrow’s voices, we’re looking to the future and asking the storytellers of the present where we can find hope in the dark,’ said Roberts-Orr.